Market to 45,650 farmer members and get higher indexing through the search engines.

Beef is NOT a Water hog 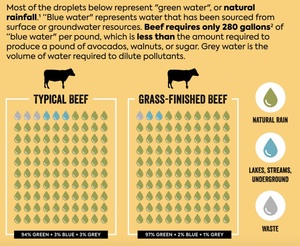 94% of Water Allocated to Beef Production is Natural Rainfall

Infographics claiming that beef production uses an excessive amount of water fail to distinguish the different sources of water, resulting in misleading information.

One of the ways that Meatless Monday has criticized beef production is through a misleading infographic claiming that it takes 10 bathtubs of water to produce a ¼-lb. burger. What the infographic does not disclose, however, is that 94% of the water "used" to make typical beef and 97% of the water used to make grass-finished beef is naturally occurring rainfall - rain that would have fallen whether or not that animal was grazing the grass.

When conducting a water input analysis, it is critical to designate the sources of the water that were used to produce that food. There are different types of water inputs and outputs. A food item that is produced almost entirely with natural rainfall, for example, isn't necessarily a water hog compared to a food item that requires large amounts of irrigated water from groundwater aquifers or a large amount of water to dilute pollutants. This is why infographics like the one from Meatless Mondays is deceptive. Context is key.

Why the source of the water matters

There are three types of water, according to Water Footprint Network, green water, blue water, and grey water.

Green water is rainfall and naturally occurring precipitation that is temporarily stored in the soil or on top of the soil. It does not runoff into other waterways or infiltrate the soil to reach groundwater storage basins like aquifers.

Blue water is fresh surface or groundwater that can be found in freshwater lakes, rivers, and underground aquifers.

Grey water is freshwater that has been used during some manufacturing or processing practice. It is defined and calculated as the volume of water that is required to dilute pollutants to such an extent that the quality of the water remains above agreed water quality standards.

The type of water measured for a food item can affect whether it looks like a water hog. When it comes to typical cattle production, the amount of green water used is about 94% of the total water input. This means that the overwhelming majority of water attributed to beef production is rain that would have fallen regardless of whether cattle were being produced or grazing on the pasture where the water fell.

Beef production is able to draw the overwhelming majority of its water needs from natural rainfall because the beef production system begins with a cow-calf operation where herds of cows are raised on pasture and bred to have a calf once a year. Cattle only spend on average the last five months of their lives in a feedlot. This is a massive difference compared to chicken and pork production, which takes place almost entirely inside large-scale confinement houses. In a grass-finished beef operation, the amount of green water used is closer to 98% because the cattle are raised exclusively on pasture.

Beef-related water calculations also commonly include water used to produce the grain fed to cattle. Livestock feed often requires irrigation, which is considered blue water. But what many people don't realize is that typical cattle actually consume a very small % of grain. Only 4% of the 280 gallons required to produce a pound of typical beef is blue water, however. For grass-finished beef, it drops to 3%.

When cattle producers use regenerative practices like rotational grazing, the livestock can actually improve soil health and increase the soil's water holding capacity. These practices also provide pastures with rest periods that allow any green water that falls during that period to soak into the soil and enhance the re-growing process for pasture plants.

On hard, compacted land, rainfall runs off instead of being absorbed by the soil. If there's no cover and just exposed topsoil, rain can also wash lots of this great topsoil into nearby rivers (and take with it chemical fertilizers). In a well-managed grazing system, rainfall is absorbed by the soil like a sponge, allowing the roots to have access to the water. This is especially critical in dry environments where there's little rain to begin with. This benefit can't be calculated using reductionist thinking. You must look at the entire system.

There are also ecosystem management practices like fencing off ponds, lakes, riverbanks and other aquatic areas to prevent livestock from having access to these fragile ecosystems or depositing urine and manure into the waterway.

Another point to consider is that cows don't just "use" water - they pee. About 30% of what cattle consume is returned directly to the ecosystem through urine and manure, which adds beneficial nutrients and microbes to grasslands. In a brittle landscape, rainfall is able to penetrate the top layer of soil only when there is sufficient microbial activity underground. Luckily, cattle and other ruminants can help keep grasslands healthy by biologically breaking down plants, enhancing water retention, and stimulating carbon sequestration. And livestock manure should only be viewed as waste when it's highly concentrated, not when it is being evenly dispersed through pastures to feed microbial life in the soil, the way animals defecate in the wild.

Both overgrazing and removing livestock would result in more bare spots in the pasture, leading to increased soil runoff and soil compaction. When topsoil is removed from an ecosystem or when the soil is compacted, green water (rainfall) is not easily absorbed.

Reducing our food system's dependence on monocropping may provide the greatest impact when it comes to water inputs. The fact that crop irrigation takes roughly 70% of the world's freshwater withdrawals (blue water) is largely ignored in discussions of sustainability, for example. Globally, 30% of groundwater intended for crops is used to produce rice, followed by wheat (12%), cotton (11%), and soybeans (3%).

Runoff from irrigated crops often carries fertilizer, topsoil, herbicides, pesticides, and other harmful substances into local waterways and watersheds resulting in devastating consequences for water quality and inhabiting wildlife. There is a dead zone the size of Connecticut in the Gulf of Mexico resulting from fertilizer runoff from cropland in the Midwest along the Mississippi. The nutrients in the fertilizer cause a burst of algae growth that consumes oxygen in the water, making it impossible for other aquatic plants and life to exist due to the lack of oxygen.

Water input analyses also typically gloss over differences in geographies where food is being grown. This is critical for determining whether arid regions that are already facing water shortages are being smart about blue water usage.

California agriculture uses 80% of the available water yet only contributes 2% of the state's revenue, for example. The amount of blue water needed and grey water produced from nut production is far greater than for typical meat production. And given that two-thirds of the almonds produced in California are exported, California's drinking water is being exported in the form of nuts, at least in part.

As we continue to pump water from deeper sources for irrigation and other agricultural applications, the energy required to attain the water increases, and so does the price. We're currently pumping water at unsustainable rates, faster than it can naturally be replenished. Due to our continued use of groundwater for irrigation, many of our major rivers like the Colorado, Indus, and Yellow no longer reach the ocean. Those looking to cause "least harm" to the environment through their food choices might consider how much irrigation water is required for their almond milk smoothie and the knock-on impact on fish and other animals that require rivers for habitat.