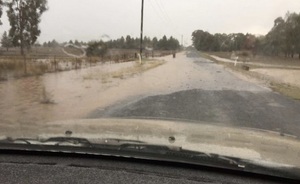 This article is bought to you by McGuckin Transport

Widespread rain across Queensland and New South Wales over the past 10 days has been more than welcome through the cropping and pastoral regions. Isolated falls of up to 12 inches have been recorded to date with more forecast for the current week.

With warming sea surface temperatures around Australia and the Indian Ocean Dipole (IOD) deteriorating from a strong positive to currently neutral phase, there are no clear established climate drivers to pull moisture away leaving us primed to capture follow up rain.

Rivers are now flowing and dams filling for the first time in over 24 months for some areas in what has been a long time coming. Although far from a drought breaker, it has managed to put a bend in the conditions experienced of recent times across these regions lucky enough to experience the storm lottery. While the recent rains are encouraging, follow up is still critical to recover from the previous successive years of moisture deficits.

The answer to what this means for grain prices will become more prevalent in the coming 4-6 weeks as feed may become more available. This could potentially lead to less on farm feeding which could influence east coast pricing.

Leading up to the rain events we have seen domestic delivered markets soften $15-$20 on the east coast as grower and trade selling intensified. The Griffith zone is down from the highs of $395 to be bid high $370’s while the Young zone is trading approximately $10 over Griffith. The Darling and Western Downs are still bid $460-$465 however expected to be serviced with transhipments of interstate grain via road, train and boats.

On the new crop front today, we are seeing an inverted market to the tune of $50 excluding carries for the 20/21 season where Port Kembla wheat is bid at $340. As the prospects of the northern crop plant improve, it is likely we will see either a larger inversion or the market to take a softer turn altogether. Having said that, we are now only mid-February and with a small sorghum crop there is a long time before new supplies become readily available to the market.

Barley in the southern markets has been coming off the boil for some time now with the Melbourne track market having traded at sub $300. What this means is that while this two-tiered market of the trade and growers exists, especially in NSW, trains should continue to feed these hungry northern markets.