Market to 44,872 farmer members and get higher indexing through the search engines.

War against misleading labelling of vegetable products as dairy products 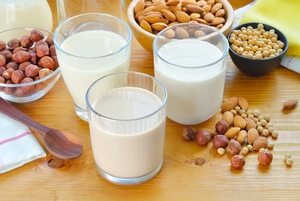 National Party deputy leader and Federal Regional Services Minister Bridget McKenzie today stepped-up the war against misleading labelling of vegetable products as dairy products.
Plant-sourced foods labelled ‘milk’ or ‘meat’ will have to be rebranded if the Federal Government is successful in changing food standards in Australia and New Zealand.
Lead protagonist for dairy truth-in-consumer-labelling in Australia, Dairy Connect, welcomed the news, saying Senator McKenzie was striking a blow for truth in labelling and product honesty.
CEO Shaughn Morgan said that, around the world, the tide was turning against plant drinks passing themselves off as nutritious dairy milk.
Dairy Connect Board Chairman, George Davey AM, is attending the International Dairy Federation World Dairy Summit where the issue of plant based beverages vs dairy products will be discussed.
Mr Davey has been a member of an IDF committee looking at the issue for the past 12 months and the committee will be continuing their deliberations in Korea during the IDF WDS sessions.
“It is vital that Australia provides continued leadership on an issue that is being debated around the world”, Mr Davey said.
Senator McKenzie has asked a trans-Tasman food regulation forum to back her bid to have Food Standards Australia New Zealand (FSANZ) review terminology and crack down on imitations.
She told ABC Online that products labelled meat and milk should only come from animals and that ‘honey’ had to be a pure product produced by bees.
Ad - Try Wormhit - New aged pelletised Fertiliser. Click here - Ad
“I want consumers to have confidence that when they buy honey, it’s honey – when they buy meat, it’s beef from an animal and when they buy milk, it is actually produced by a dairy cow,” she said.
Senator McKenzie said changes were needed to protect the reputation of Australian farmers and the products they produced.
She said farmers feared their businesses were at risk because shoppers often did not realise they were buying plant-based products, rather than products from animals.
"I don't have an issue at all with alternative sources of protein or plant-based diets," Senator McKenzie said.
“Dairy Connect supports the comments of Senator McKenzie and we continue to advocate for appropriate protection of the iconic term ‘milk’ and dairy product names generally”, Mr Morgan said.
The global battle for truth-in-labelling ratcheted up a notch in July with news that the The United States Food & Drug Administration was to crack down on plant sourced liquids marketed as ‘milks’.
Shaughn Morgan said that while some Australian plant processors may claim their products had been marketed domestically for years as ‘milks’, such descriptions were not in line with the aims and spirit of current consumer law.
The FSANZ meeting in Adelaide brought together food ministers from across Australia and New Zealand.
In April, France banned the use of meat and dairy-related terms on vegan and vegetarian plant-based alternatives.
In the US, Missouri became the first state to pass a law preventing food producers from marketing products as meat, if the food did not come from harvested livestock or poultry.
https://www.dairyconnect.org.au/