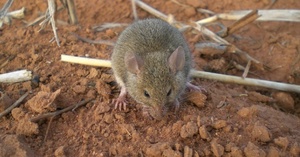 This article is bought to you by Marson Industries Australia.

Southern region grain growers are being warned about the potential for mouse damage at sowing of this year’s winter crops.

The combination of grain on the ground following strong winds prior to harvest last year and recent rainfall could promote a rapid increase in mouse populations over the coming weeks.

Recent monitoring and trapping efforts detected high rates of pregnancy in females – adding to concerns about the risk of crop damage at sowing.

Those concerns were raised at the latest meeting of the National Mouse Group (NMG), a Grains Research and Development Corporation (GRDC) investment. The NMG, which co-ordinates actions to counter mouse plagues, comprises researchers, advisers, growers and other industry stakeholders.

GRDC-supported mouse researcher Steve Henry from CSIRO, Australia’s national science agency, told the meeting that the combination of an abundance of grain remaining in paddocks and good rainfall were leading to ideal conditions for mouse breeding, and growers in some areas are already reporting increased activity.

“Such a large amount of grain on the ground combined with reasonably heavy rainfall over recent weeks could lead to a rapid increase in mouse populations ahead of sowing.”

Mr Henry said large quantities of grain on the surface of paddocks could reduce the chance of mice finding toxic bait, while at the same time providing an ongoing food source for mice.

“If strong winds have resulted in two tonnes/hectare of grain on the ground in some areas, that equates to up around 4000 grains per square metre.

“The challenge for growers is to reduce the food load for mice in stubbles. Putting sheep on stubbles and strategic cultivation (burying grain) will assist with food reduction, and growers should spray out any summer germinations. Seeding with knife points assists in burying residual seed – enhancing bait uptake.”

Mr Henry emphasised the importance of timing of bait applications.

“It is critical that growers bait six weeks out from seeding if mouse numbers are reasonably high, and then follow up with another bait application off the back of the seeder if numbers are still high at sowing.

“A six-week break between applications avoids the risk of bait aversion.”

Zinc phosphide bait must be spread according to the label rate of one kilogram per hectare.

As summer spraying intensifies, reports of mouse presence are expected to increase.

“I also urge growers to report and map mouse activity – presence and absence – using MouseAlert so other growers can see what activity is being observed in their neighbourhood and via Twitter using @MouseAlert.”

As part of the suite of GRDC investments, CSIRO researchers have been undertaking trials to determine if they can enhance the uptake of zinc phosphide bait by testing potential new bait substrates that may be more attractive to mice.

Researchers are testing the willingness of mice to transition from one food to another and then determining whether mice will continue to eat that alternative food source once zinc phosphide bait has been applied.

GRDC research investments have shown that: mice prefer cereals over lentils; background food significantly affects consumption of bait; and strategic use of bait is more effective than frequent use of bait.

The work being undertaken by CSIRO is outlined by Mr Henry in a GRDC podcast and video.