Market to 45,650 farmer members and get higher indexing through the search engines. 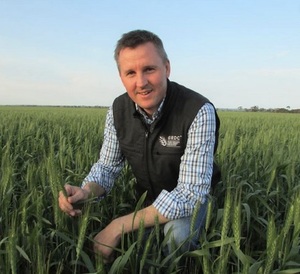 This article is bought to you by Pepperton.

Five centres of excellence and a network of focus farms will be established in high yield potential grain-growing environments across Australia as part of a major new investment by the Grains Research and Development Corporation (GRDC).

Starting next year and concluding in 2025, this national investment will build on the success of the GRDC's Hyper Yielding Cereals Project that has been conducted in Tasmania over the past four years.

The five centres of excellence will be an expansion from Tasmania to include key high yield potential dryland cropping areas of Victoria, South Australia, Western Australia and New South Wales.

Attached to each centre of excellence will be five focus farms (25 farms in total) and a lead grower network aimed at taking research and development learnings from small plot to paddock scale.

GRDC Senior Regional Manager – South, Craig Ruchs, says the new investment is an evolution of the success of the Hyper Yielding Cereals Project investment, both in geographic reach and crop scope.

"The new investment will see a shift in focus from a feed grain cereal initiative to explore broader opportunities in wheat, barley and canola, as well as pulse crops, where appropriately adapted varieties warrant inclusion in the program.

"The current project – aimed at driving an increase in Tasmania's production of high-quality feed grain cereals and thereby reducing its reliance on supplies from the mainland – has shown that it is very possible to more than double yields in some situations through planting of the right cultivars and effective implementation of appropriately tailored management strategies."

Mr Ruchs said the Hyper Yielding Cereals Project utilised a 'seeing is believing' participatory research approach, with results being achieved in growers' own paddocks and local environments. This same approach will underpin the new national investment.

"We hope this proven approach, combined with appropriate mentoring and agronomic support, will assist growers to move from intent to change, to implementation, providing the motivation, knowledge and ability to realise yield and profit opportunities.

"Through the new investment, high yield potential cultivars suited to local environments will be identified and the most appropriate agronomic management tactics – including paddock selection and preparation, canopy management, disease, weed and pest control, and crop nutrition strategies – will be explored to assist grower and adviser decision making.

"Growers will have the knowledge, ability and confidence required to advance their farming systems beyond the status quo."

The current Hyper Yielding Cereals Project in Tasmania is being led by FAR (Foundation for Arable Research) Australia in collaboration with Southern Farming Systems (SFS).

The project has attracted considerable interest from mainland growers, and as an extension of the Tasmanian research, the GRDC recently partnered in the South Australian Crop Technology Centre which is located near Millicent in SA's high rainfall South-East.

The research site was established to evaluate high-yielding, long-season germplasm from Australia and overseas that has the potential to drive yields in mainland high rainfall zones. Similar to the Tasmanian initiative, the SA Crop Technology Centre project is also focused on the role of agronomy and new technologies in assisting growers to boost production and profitability.

Mr Ruchs said the new national investment and its targeted outcomes were strategically aligned with one of 30 GRDC Key Investment Targets recently developed to set the direction for future investment under the GRDC's Research, Development and Extension Plan.

"The Hyper Yielding Crops initiative announced today aims to support growers in their endeavours to extract more from their farming systems by ticking all those boxes. It will help to address current risk and reward trade-offs to further reduce the gap between current yield benchmarks and the water-limited yield potential of the best adapted crop cultivars available to grain growers in high rainfall, long growing-season Australian cropping environments."

More details will be available shortly on the open tenders section of the GRDC website.

In the meantime, growers wanting to know more about the Hyper Yielding Cereals Project can view a series of GRDC YouTube videos filmed at the Hagley research site, and can listen to a GRDC podcast of FAR Australia's Nick Poole discussing the initiative.

Picture - Craig Ruchs, GRDC Senior Regional Manager – South, today announced that five centres of excellence and a network of focus farms will be established in high yield potential grain-growing environments across Australia as part of a major new investment by the GRDC. Photo: GRDC