Market to 41,931 farmer members and get higher indexing through the search engines. 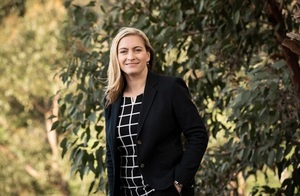 This article is bought to you by Trigger Vale Sheep Studs and Brooke's Livestock Carriers.

For Deanna Lush, a communicator and farmer from Palmer on South Australia's Murray Plains, trust in agriculture and its producers is vital to the industry's continued success. Deanna's project involves establishing a network of ‘Trust in Ag Champions' who will have the tools, knowledge and confidence to engage with non-agricultural audiences.

She says it is a strategy for the ag industry to start to change the way it engages, particularly with those who do not understand or share a connection to agriculture, and is about bringing authenticity and transparency to that approach.

As co-founder of specialist primary industries communication, marketing and events business AgCommunicators, Deanna is passionate about ensuring Australia's agricultural industries are recognised as progressive, professional and tech-savvy, and ensuring the vital role of producers is understood, valued and trusted by the Australian community.

Deanna is a strategic communication specialist working across primary production, natural resources and agripolitics. Her broad media experience includes rural, regional and metropolitan media across Australia. She has a rare mix of agricultural knowledge, political experience and communication ability, gained through her role as media adviser to the Minister for Water during the millennium Murray-Darling Basin drought.

She is a former editor of South Australia's rural weekly the Stock Journal, and was a national commodity journalist specialising in the grain, sheep and wool industries, writing for all the Fairfax rural weeklies, including The Land, Stock & Land, and Farm Weekly.

In 2017, Deanna completed a Churchill Fellowship studying communication and engagement methods to improve the understanding of agriculture between rural and metropolitan audiences.As part of the fellowship, she travelled through the United States, United Kingdom and Canada and her report was published in February 2018 for the Churchill Trust. She delivered numerous presentations across Australia and across all food and fibre sectors on her Churchill recommendations to build trust in agriculture.

Her work on trust in agriculture won the Australian Farm Institute John Ralph Essay Award in October 2018. In 2019, she was recognised as an emerging South Australian business leader in the InDaily 40 Under 40 Awards.

Deanna holds a Bachelor of Journalism and a Graduate Diploma in Business Administration. She is a graduate of the Australian Institute of Company Directors and maintains an active membership with the organisation.

Deanna and her husband Steen Paech farm in South Australia, cropping cereals, pulses and oilseeds, and running sheep and "a handful" of cattle over 4500 hectares at Palmer.