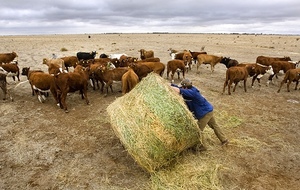 This article is bought to you by PMG Finance.

2020 is set to be an “extremely challenging” year for Australian agriculture – with production likely to remain weak and the sector facing the third consecutive contraction in farmgate revenues – according to a new industry report.

In its flagship Agribusiness Outlook 2020, food and agri specialist Rabobank says while a strong rebuild in national agricultural production is possible in 2020/21, it is “less than likely” as the much of the country’s agricultural sector continues to grapple with low soil moisture and water storages, feed shortages and the localised impacts of bushfire.

After several poor seasons in many regions, “a multi-year rebuild” is now the most likely path ahead for Australian agriculture, the report says.

There is some consolation for the sector, however, with Rabobank forecasting a continuation of current high prices for most agricultural commodities for the coming year.

Australia’s agricultural sector had started the year in “extremely challenging circumstances”, with much of the country still in the midst of multi-year drought.

“Many farmers entered the current drought in good shape – after an extended run of good seasons and prices enabled them to build equity buffers. However, after poor seasonal conditions over the past three years, the sector is in a tough position heading into 2020,” he said.

“2019 was marred by drought, fire and flood. It was the driest year on record, compounding the drought already being experienced by the eastern states in the years prior. And, while recent rainfall across drought-affected regions has brought some optimism, farmers will need continued rain to replenish soil moisture and break the drought.

“Low soil moisture and feed shortages are widespread, while key water storages in the southern Murray Darling Basin are at their lowest levels in a decade. And bushfires have also caused localised damage and disruption.”

This had seen production volumes down “pretty much across the board” for the 2019/20 growing season, he said – with poor winter crops, cotton production slashed and meat and dairy reduced due to falling herd numbers.

High agricultural commodity prices have gone some way to offsetting this pain, the report says, with firm global markets, a weak Australian dollar and reduced local supply contributing to a near-record year for farmgate prices.

That said, the 2019/20 season will see the third consecutive year where farmgate revenues will contract.

A strong rebound in production growth is likely to remain elusive for Australian agriculture in the near term, the Rabobank Outlook says, impeded by weather conditions and physical constraints to rebuilding supply.

“While weather can change quickly, the equation is tougher than usual,” Mr Hunt said. “Given the low level of soil moisture, farmers will likely need more-than-average rainfall to get an average winter crop, and current Bureau of Meteorology forecasts suggest there is a less-than-even chance of average rainfall over the next three months.

Financial constraints will also impact, the report says, with farmers likely to want to rebuild equity before investing to expand production once better seasonal conditions return.

While Australian agricultural production will likely remain weak in 2020/21, there will be some consolation for the sector with the forecast of continuing high commodity prices, Rabobank says.

“For the animal protein sector, Chinese imports will remain at elevated levels in the wake of China’s culling of livestock in response to African Swine Fever, with the rebuilding of their pig population to take several years,” Mr Hunt said, “while global markets for wool and dairy remain firm and the local market basis (wheat price) will be sustained by constrained domestic grain production.”

With 2020 shaping up to be a pivotal year for the world’s transition to tackling climate change, the report says, it will be important to rebuild a “robust and adaptive” Australian agricultural industry post-drought.

“There are a number of factors mounting to indicate 2020 is going to see a significant transition in the world’s tackling of climate change, which will create opportunities as well as threats for agriculture. It will be important for the Australian sector to rebuild out of drought to be strong and adaptable so it can capitalise on these opportunities and mitigate the threats that lie ahead,” Mr Hunt said.

Other watch factors for the year, the report says, include:

- tensions with China, with the Chinese ruling on its anti-dumping investigation into Australian barley due by June

- the impact of the Phase 1 deal between the US and China on Australian agricultural exports, particularly almonds and cotton

- the global economic impacts of the US presidential election and Brexit, and

- the potential for improved trade deals with the UK and the EU.

Wheat – rain or no rain, a forecast four per cent year-on-year lift in global wheat prices, along with currency depreciation, will support local wheat prices in 2020.

Grains & oilseeds – there’s still a ‘bear in there’ for barley while canola is set to shine with supportive local and global factors.

Sheepmeat – lamb prices expected to ease slightly in 2020, after reaching records in 2019, driven by limited supplies and strong demand.

Horticulture – demand for fresh produce to remain strong, but local and global headwinds bring some risks.