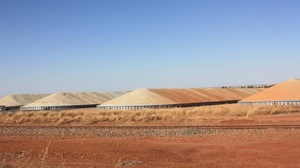 This article is bought to you by Warrick Hay & Grain.

There are no more soothing or relaxing sounds than the rumblings of distant thunder followed by the pitter patter of rain on a corrugated tin roof; an experience revived for those fortunate enough to receive rain in the last week.

While there is still the prospect of more falls this week, the rainfall recordings to date have been a touch disappointing compared to the forecasts prior to the change moving through the eastern states late last week and over the weekend.

The drought has definitely not broken, but it is a start and all falls were gratefully received in the regions lucky enough to make the scorecard. People are now looking for some follow up falls in the next few weeks to confirm a change to the record dry pattern that has haunted and stymied agricultural production on the east coast since 2016.

It is too late to plant cotton, but forage sorghum, grain sorghum and mung beans are all options available to those growers in Queensland and northern New South Wales who received enough rain to join up with their existing subsoil moisture or those who can’t resist the temptation to get back in the game even though the rainfall was less than ideal.

At this stage, it is hard to see a substantial change to the summer crop production numbers and the eastern state consumer will continue to rely on grain movements from Victoria, South Australia and Western Australia to satisfy the majority of their requirements through to late 2020.

The headers are now back in the shed in all regions except the Western Districts of Victoria, and the final winter crop production numbers certainly reveal how deep the drought cut in 2019.

Western Australia disappointed, compared to pre-harvest expectations, with wheat, barley and canola production coming in at 5.5 million metric tonne (MMT), 3.5MMT and 1.1MMT respectively. With a late break in many regions followed by poor winter rainfall, the crops entered spring well behind the eight ball. Below average spring precipitation meant the crops never got close to average potential in most districts.

While production in South Australia was marginally better than in 2018, it was still well below average. Wheat, barley and canola production finished up at around 3.0MMT, 1.7MMT and 0.35MMT respectively. Harvest receivals into the Viterra system were extremely disappointing and appear to be a reflection of increased storage competition and the immediate movement of grain direct into domestic demand points in the eastern states.

The Victorian harvest is almost complete, and it is the only state where yields in 2019 have significantly surpassed the drought-ravaged 2018 numbers. Final wheat production is expected to be 3.5MMT, barley production is forecast to finish at 2.4MMT and canola production at 0.55MMT.

In a big year, New South Wales can challenge Western Australia as the biggest grain-producing state of Australia. Not in 2019. While the south of the state generally had better crops than in 2018, other parts were much worse. The area of wheat, barley and canola that was cut for hay was enormous. Add the proliferation of on-farm storages in recent years, and the state production guessing game gets increasingly difficult with each passing year.

That said, it seems that total wheat production finished up slightly less than in 2018 at 1.6MMT. Barley production was also down year-on-year at 0.6MMT, but canola bucked the trend with output a little higher at 0.25MMT.

That leaves the “Sunshine State” of Queensland where wheat production increased year-on-year to 0.6MMT thanks to a better than average season in Central Queensland. However, barley production remained static at 0.1MMT.

So, what do we have to export? On the canola front, the exportable surplus is 1.4MMT based on domestic demand of 0.85MMT and no building or drawdown of stocks throughout the season.

On the barley front, I am calling the carry-in 1MMT, with a 0.2MMT increase in stocks leading to a carry-out 1.2MMT. If we call domestic demand for malting barley 1.1MMT and feed barley 4.0MMT, that leaves an exportable surplus of 3.0MMT. Quite a modest target in light of historic demand from China.

However, sales into China have been slower than expected so far this season, and some traditional Japanese demand has been going to Canadian exporters. Other Asian consumers have stepped up, but the current pace is well behind that needed meet a 3.0MMT export target.

From a wheat perspective, the biggest moving target is the October carry-in figure. I have seen some estimates as high as 3.5MMT and some as low as 2.5MMT. Let’s call it 3.0MMT. If we call imports 0.3MMT, then that gives us a total wheat supply of 17.5MMT.

Domestic demand is always interesting and tends to be underestimated in my book, but it should be around 8.5MMT, assuming we get rain and the cattle on feed numbers drop in the second half of the marketing year.

If we assume that stocks are drawn down by 1MMT across the season, that leaves a carry-out of 2MMT and an exportable surplus of 7MMT. Looking at actual November exports and the December and January shipping stem we will have exported 2.6MMT by the end of January. That compares to only 2MMT for the same period last season.

The stem for February is building, and Asian export enquiry for Australian wheat continues to surface. If export sales continue at the current pace, the wheat cupboard will be quite bare by the end of May.

While the season was extremely disappointing from a production viewpoint, the pace of wheat exports and continued enquiry from Asian consumers is supportive of current domestic prices, despite the premium to global values.

Unfortunately, the same can’t be said for barley exports but the domestic balance sheet is quite tight and could handle a bigger carry-out number without being bearish, especially at the current price spread to wheat.