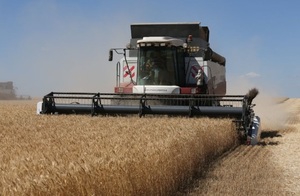 Analysts continue to forecast the 2020/2021 Russian wheat crop at 80-82 million metric tonne (MMT), despite developing dryness across the Black Sea region and very little good news in the nearby forecast. A crop of this size would be the second-largest on record, around 6 per cent lower than the 85MMT produced in 2017/18.

Planting of the Russia winter cereal crops (mainly wheat) was completed in October and the area sown is officially estimated at a record 18.2 million hectares, 104 per cent of the original forecast area. This increase was buoyed by quite favourable planting conditions in the autumn, improved technologies and underpinned by Government policies to boost grain exports.

Russia had an extremely mild winter with minimal snow cover across much of the winter crop area. This has led to a more advanced crop but lower than average soil moisture for this time of the year. As the spring days get longer and warmer, the water requirements of the crop are increasing, but the rains have not been forthcoming.

While the conditions are not dire at the moment, a continuation of the unseasonable dry and windy conditions will put downward production pressure on the maturing crop. The one saving grace is daytime temperatures, and as a result evapotranspiration rates, have been lower than normal in recent weeks.

Ironically, the Russian government has approved an agriculture ministry proposal to limit grain exports for the final quarter of the marketing year to 7MMT. The measure will affect wheat, barley, rye and corn exports and is viewed as a move to ensure there is sufficient grain to meet domestic demand amid the coronavirus outbreak.

Russia’s export pace had picked up significantly in recent months, with March wheat exports reportedly 3.3MMT, and April export projections higher again. There are also signs that a number of the globes bigger importers are looking to increase reserves amid concerns that coronavirus will disrupt global supply pathways.

The announcement was in line with market expectations and will ultimately limit wheat exports to around 33MMT. This compares to the current USDA projection of 35MMT. However, the trade is concerned that this may just be the start and further steps may be implemented if the pandemic worsens and/or the new crop prospects begin to decline.

There is no indication of how the export restrictions will work or how they will be imposed. Still, some exporters have already found it difficult to obtain phytosanitary export certificates for wheat, peas and oilseeds. The government has denied any slowdown, but this is a strategy adopted by Moscow in the past to restrict exports.

In another move to assist domestic consumers, and curb the inflationary effects of the devaluing ruble, the government has announced that it would sell up to 83% of wheat from its state stockpile. The auction is expected to start on April 13 and is aimed at increasing supply for flour millers and bakers.

The Agriculture Ministry has reserves of 1.8MMT of wheat. The grain is quite old, the last of it purchased in 2016, and is mainly stored in Siberia, far from the country’s main export ports on the Black Sea. Russia used to put great emphasis on having large grain stockpiles, but this has been reduced in recent years as its annual production became more stable and the government sought to increase export income.

They had initially planned to sell down 1MMT from the stockpile, but this was increased to 1.5MMT last week. Maybe this suggests that the domestic situation is worse than is currently being admitted and leaves the government with no more bullets to fire if new crop production begins to decline, other than extending the export quotas and/or re-instating taxes.

The initial Russian government response to the coronavirus was decisive, closing the border with China way back in January. But since then there has been a decided lack of coordination in the internal response with Putin telling regional officials to determine, and impose, those restrictions they deem necessary to protect their residents.

This led to a state of turmoil last Friday at the entry to the Black Sea port of Novorossiisk, Russia’s main export terminal. A coronavirus control regime, set up by regional officials, led to 173 trucks carrying 4,500 metric tonne of wheat being denied entry to the port to unload as they didn’t have the required COVID-19 entry permits.

Meanwhile, Egypt, Russia's biggest customer, announced a wheat tender mid-way through last week for May 5-15, then abruptly cancelled the tender, without giving a reason. The trade suggested it was because they didn’t want to be embarrassed when no one offered against their new contract specifications on origin delays. They had included new terms that required suppliers to replace any wheat that was blocked by any coronavirus shutdowns.

However, it may be more to do with changes to the way it buys grain. President Abdel Fattah al-Sisi encouraged authorities to boost the country's reserves of strategic commodities last week amid rising fears for food supplies due to the coronavirus pandemic. Rumours suggest that the General Authority for Supply Commodities could ask for suppliers to offer on a cost and freight basis rather than free on board.

Invariably, the northern hemisphere weather dominates grain markets at this time of the year. In 2020 we have the added impact of a global pandemic which has restricted the movement of over half of the world’s population. This has added a level of demand uncertainty and variability where history provides no guidance.

The world is flush with feed grains and wheat, and new crop production is looking fine at the moment. Any substantial erosion of demand beyond the initial hoarding will likely be bearish for world prices unless we see significant production issues surface in the northern hemisphere over the next three months.