Market to 44,872 farmer members and get higher indexing through the search engines. 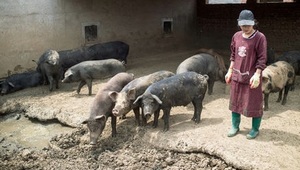 This article is bought to you by Loadshift.

Sunrice has announced a reconfiguration of its manufacturing operations in the Riverina as a result of one of the smallest rice crops on record. The changes will effect the Deniliquin and Leeton mills, and also Australian Grain Storage sites as determined by a comprehensive review of SunRice's operational footprint which took place earlier in the year. Sunrice Chief Executive Officer, Rob Gordon, said, "While today's changes relate to the milling of the low C19 crop, harvested earlier in 2019, we remain concerned about the ongoing impact of the low water availability and high prices ahead of planting of the C20 crop later this year."

The Australian Farmland Index highlights the impact of continuing drought on the sector. The index uses data provided by some of Australia's largest agricultural asset managers, the likes of which include, Rural Funds Management, Laguna Bay, goFARM Australia and Gunn Agri Partners. Total annualised returns are down from 16.2 percent in the March quarter to 12.5 percent in the June quarter, falling below the historical average of 14.2 percent (derived from data recorded since the index was created in December 2015).

There has been an upturn in the value of shares in agricultural chemicals company, Nufarm, after it was announced the company would be divesting its South American operations to Sumitomo for $1.18 billion. Nufarm reported a statutory net profit after tax of $38.3 million for the 2019 financial year earlier in the week, an improvement on the $16 million loss recorded in the previous year. Despite this, Nufarm announced it would use the proceeds of its asset sale to repay some of its debts. The move will ease Nufarm's net-debt burden which currently sits in the vicinity of $1.3 billion.

Hungry Jack's founder, Jack Cowin, is investing in the construction of a $20 million facility which will process legumes into 'meat'. It is the first of its kind in Australia and will supply 'v2food', a new plant-based meat venture that's backed by CSIRO's $232 million Innovation Fund and institutional investors including Hostplus and Cowin's Competitive Foods. Cowin's Competitive Foods is the supplier and operator of more than 430 Hungry Jack's restaurants nationally. Construction is set to begin before the end of 2020 and will initially make hamburger patties.

Fuel and steel entrepreneur, Evan Ryan, will look to agriculture and commercial property to invest as much as $90 million following the family company, Ryan Global, selling its remaining stake in Steelforce to GFG Alliance for circa $70 million and 'Retreat Station', a cattle station in western Queensland, for $20 million. Mr Ryan said, "Funds from recent settlements will be used to realise some commercial real estate opportunities we have been looking at, and to accelerate development of our large scale agriculture project at our Cape York rural aggregation of 'Olive Vale', 'Fairview' and 'Koolburra' stations."

The latest 'Vegetables Australia' quarterly publication has been released this week by AusVeg. This edition discusses the issues facing the industry as well as pointing to some of the work being completed by key industry organisations. It also points to the strong growth occurring in the export market. According to the latest data from Global Trade Atlas, the value of fresh Australian vegetable exports increased by 14 percent to AUD$287 million in 2018/19. AUSVEG National Manager – Export Development Michael Coote said, "Around 86 percent of Australia's fresh vegetable export volume is comprised of carrots, potatoes and onions. Carrots remain the highest traded fresh vegetable commodity by both volume and value, with strong international demand for Australian carrots contributing to steady year-on-year growth over a sustained period of time."

Industry estimates suggest up to 25 percent of the global pig population has been wiped out by African Swine Fever (ASF) to date. Compounding on this news, it was reported that cases of ASF were identified in Timor-Leste. Discussing the topic this week was meat and livestock analyst, Simon Quilty, interviewed by the ABC's 'Lineline' team. From the interview it is understood that while ASF is nearing - physically - to Australian borders, our vulnerability is not necessarily greater than any other country. This is because the highest risk of infection is conveyance through the movement of people, thus airports are the key high risk areas. Mr Quilty said, "The cause of contamination is still unknown but if other infected countries are a guide, then humans are the likely cause of migration via either contaminated food products or simply [from being] present on clothing and shoes and carried into Timor from an infected country."