Market to 50,678 farmer members and get higher indexing through the search engines. 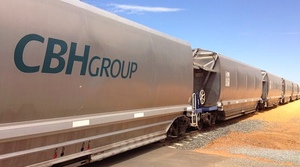 * Tonnes stated are accurate as of Friday morning, 20 November.

Receival volumes increased daily following the most recent rain event, and more than 430,000 tonnes delivered on Thursday resulted in our largest receival day so far this season.

"It's a relief for many growers, who have been prevented from progressing through the bulk of their harvest programs due to unfavourable weather conditions.

"It's also pleasing to hear reports of boosted yield expectations across most zones and commodities, and so far, minimal quality issues as a result of November rainfall," he said.

"We'll continue to monitor this as increased grain volumes are delivered into the network."

This week, grower prices have continued to move sideways between $330-340 per tonne free in store (FIS) Kwinana for APW. At these levels, there is limited grower selling as growers look towards the next level of $350 per tonne FIS Kwinana. Growers are also focused on harvesting canola, barley and lupins, and selling directly off the harvester. We are therefore not expecting additional selling until they move into their wheat crops. International demand remains, with interest from Africa, the Middle East and parts of Asia during the week.

The feed barley market firmed this week to $270 per tonne FIS Kwinana, as the trade covered its Saudi Grains Organization (SAGO) tender requirements and additional interest from Asian and Middle Eastern buyers. Grower selling has been reasonable at this level, as growers sell as they deliver. Interest in feed barley looks to continue in the near-term, with Australian feed barley competitive against a number of alternative feed ingredients.

The canola market has been very strong this week, with prices rallying to $665 per tonne FIS Kwinana - the highest levels since March 2020. Grower selling is also relatively strong based on these historically high prices. A very strong oilseed complex internationally has seen canola values in Australia follow as markets look to cover their requirements. Questions remain over what European demand be like as we move into the first quarter of 2021.

Oat prices have been rangebound in the $290-300 per tonne FIS Kwinana for some time, with limited grower selling occurring at this stage. While the oat harvest has commenced, we are not anticipating increased grower selling for a few more weeks when the major oat areas commence their harvest.