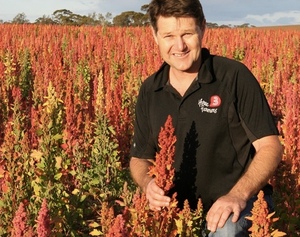 For Ashley Wiese, who owns and manages 5,000 hectares in Western Australia, sustainable farming is the smartest way to secure optimum output and food quality, but also to survive as a business in a challenging industry.
Ashley Wiese started off working as an accountant in Perth. However, he always intended to use those skills in agriculture and soon decided to go back to his roots, a farm in Western Australia first established by his great-grandfather. Today, Wiese is the Director of Yarranabee farm. Together with his wife Jo, he farms 5,000 hectares in total: 4,000 hectares of grains such as oats, barley, canola and lupins, and 1,000 hectares of sheep for lamb and wool production.
First Australian quinoa
Wiese added quinoa to the mix in 2010, joining forces with two partners to produce and market this ancient grain from Peru under the name Three Farmers Quinoa. “Quinoa is highly nutritious and is very efficient in its use of rainfall and nutrients. So we can produce a superfood in dry conditions,” he says.
He is increasing production gradually to match supply with demand, growing 430 hectares on his farm in 2016. That same year, the label supplied quinoa to 720 stores in Australia. The farm now has a large-scale processing plant on-site with a capacity to process about 5,000 tonnes annually to accommodate an expanding market.
Taking root....
“There was no other quinoa production in Australia. It was all imported from South America – the other side of the world. So the attraction for us and our customers was to enable local supply.” Wiese also expects rising demand from Asia. “It may take a decade to really take off because of the strong cultural affinity with rice, but we are making inroads and we have small amounts going to Japan, Singapore and Taiwan.”
“With quinoa we can produce a superfood in dry conditions”
- Ashley Wiese, Director, Yarranabee Holdings Pty. Ltd.
It’s all about water
This region has an annual rainfall of around 400 millimeters and no access to underground water. It’s simple dryland farming, so it’s all about making the most of the limited water available. One way of doing that is to sow crops a month earlier so they mature when there is still enough rain. “It means we are no longer reliant on those crucial ‘finishing rains’ in spring, which often don’t come,” Wiese explains. Yields have risen dramatically as a result.
Sustainability means survival
Here, sustainability is more than an eco-friendly ideal, it’s a necessity. “We have really fragile soil, so we’re very conscious of looking after it,” Wiese says. Key to improving soil health is ‘no-tillage’. This method leaves most of the soil undisturbed, allowing organic matter to build up, which stimulates the presence of microbial activity. It also prevents water run-off , so rainfall stays where it is needed.
“Our soil is very fragile, so we’re conscious of looking after it”
- Ashley Wiese, Director, Yarranabee Holdings Pty. Ltd.
The future of our food
For Wiese, his role as a farmer is clear: to grow good-quality food and to nurture his animals and soil. He is optimistic about the future. “I have total faith in farmers’ ability to feed the world, as long as customers value their food and pay a fair price to allow us to grow it.”
Picture - Ashley Wiese
https://www.rabobank.com.au/