New Header sale down 20% for the year 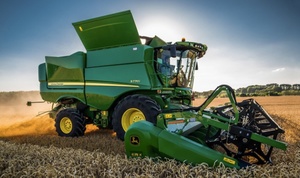 This article is bought to you by Mulcahy & Co Agri Solutions.

Agricultural tractor sales have benefited from and end of year rush with December sales up 7.5 % for the month compared to December 2018.

Whilst a pleasing end to the year, it remains to be seen to what extent dealers have brought forward future sales in order to finish the year positively. Despite achieving what is a fairly positive result, expectations for 2020 remain somewhat pessimistic with a predicted level in the range of 9,000 – 10,000 tractors, well down on the recent peak years of 12,000 plus sales.

The continuation of severe drought, water shortages and crippling bushfires are having a devastating effect on many of our major industries in most states. Victoria remains somewhat of a bright spot with the December month up 22% on last year finishing the full year in line with 2019.

Queensland sales finished strongly, up 6% for the month but finished the year down 7%. The struggles in NSW continue with another 12% fall in December finishing the year 20% down on 2018.

Activity in the West continues to drift, finishing the year in line with last year but down 6% in December.

Times were tough in South Australia in 2019, down 21% on 2018 whilst Tasmania and the Northern Territory reported the only regional increases up 5% and 4% respectively

It’s been a tough time for Combine Harvester Sales, finishing the year 20% behind last year with very little being reported in the way of forward orders. Compounding this is the level of overhanging inventory, some as old as two (2) years now which will likely be clogging up the supply chain as new models begin to hit the market.

As previously reported, demand for Hay has been strong all year resulting in a bumper year for baler sales, particularly large square balers, finishing the year 15 % ahead of 2018.

Finally, sales of Out Front Mowers dropped considerably, down 42% in the month finishing 5% behind last year.

The market for Agricultural Equipment in 2019 ended with some very distinct winners and some very distinct losers. Tractor sales in Victoria have been strong as has been the case in WA. Baler sales have boomed as farmers turn failed crops into forage. Combine Harvester sales have stalled as the broadacre market suffers and self propelled sprayers have also struggled. We expect 2020 to be even more challenging.

Lastly, the date for the 2020 TMA Conference has been set at Tuesday July 21st to be held once again at the Hyatt Place Melbourne, Essendon Fields. Full program details will be shared early in the new year.

Ad - Mulcahy & Co Agri Solutions provides a wide range of Farm Financial Services, they make sure you get results from all your hard work - Ad