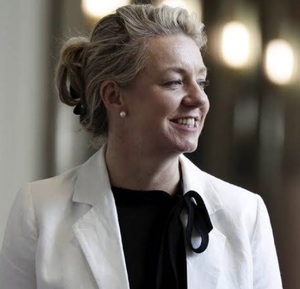 This article is bought to you by Mazaratto Hay Freight.
By Shaughn Morgan - Dairy Connect.
Dairy Connect today welcomed the appointment of Senator Bridget McKenzie as the new Federal Agriculture Minister and we extend our congratulations to her on her new ministerial responsibilities. Dairy Connect looks forward to working with her and her office in furtherance of a sustainable dairy industry in Australia.
The appointment was part of a package of existing and new Ministers announced by the Prime Minister Scott Morrison following last weekend’s Federal Election.

Ad - Need to shift some Hay? Try Mazaratto Hay Freight, Singles, Doubles, Triples, Big or Little Squares, Rolls, North or South. Give them a try - Ad
Dairy Connect extends its thanks to outgoing Minister for Agriculture David Littleproud and we look forward to working with him in his new portfolios of water resources, drought, rural finance and natural disasters.
Dairy Connect CEO Shaughn Morgan said Minister McKenzie would need to hit the ground running because of the multiple challenges facing agriculture generally and dairy in particular.
“First item on our agenda for action will be the urgent need to appoint a Federal Dairy Commissioner to fast-track solutions to the myriad market challenges facing dairy production in Australia,” Shaughn said.
“Australian dairy is in crisis and now is the time for action. The time for reviews and inquiries is over.”
“The crisis is due to the on-going impacts of drought; dairy herds being culled; skyrocketing energy prices; higher production costs; unconscionable milk supply agreements; and market failure.

Ad - Need to shift some Hay? Try Mazaratto Hay Freight, Singles, Doubles, Triples, Big or Little Squares, Rolls, North or South. Give them a try - Ad
“The proposed new Mandatory Code of Conduct for the dairy industry is not due to kick-in until 1 July next year. Its commencement date should be moved forward.
“Industry issues that need urgent attention could be addressed by a Federal Commissioner with appropriate powers to make decisions immediately, in cooperation with government.”
CEO Shaughn Morgan said a Federal Dairy Commissioner could anchor critical industry reforms working in close cooperation with State counterparts and the public service.
“A Federal Dairy Commissioner would provide a conduit to relevant Ministers and the Federal Parliament on issues raised by the dairy industry on a regular and on-going basis.
“Importantly, the role would coordinate the differing priorities of the States and provide the opportunity to liaise with State dairy counterparts, such as the NSW Fresh Milk and Dairy Advocate.”

Ad - Need to shift some Hay? Try Mazaratto Hay Freight, Singles, Doubles, Triples, Big or Little Squares, Rolls, North or South. Give them a try - Ad
“It is not suggested that the Commissioner would have regulatory powers but rather would be a point of contact for producers throughout Australia with issues that may arise with, for instance, their milk supply agreements,” he said.
“This role would be separate from the functions of the Australian Competition and Consumer Commission.
“Where the ACCC would provide oversight and compliance with the planned mandatory code, the Dairy Commissioner would take a broader approach to the supporting the dairy value-chain,” Shaughn concluded.
https://www.dairyconnect.org.au/