Market to 49,362 farmer members and get higher indexing through the search engines. 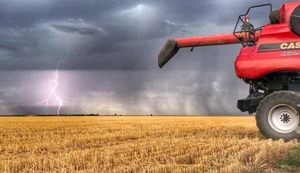 The Australian winter crop harvest cycle commences in September each year when headers roll into the vast wheat and chickpea fields of Central Queensland. Then, as the headers move south into southern Queensland, farmers on the opposite side of the country, in the northern reaches of the Western Australian wheat belt, also click into action.

This triggers a bilateral southerly progression of harvesting teams and equipment that covers more than twenty million hectares before concluding in the southern parts of Victoria and South Australia in late December or early January.

Unlike last year, where drought conditions meant relatively few harvest delays, concern this year, particularly in the eastern states, revolves around the likelihood of a wet harvest and the unwelcome possibility of quality downgrades. This would be a devastating blow for growers who are looking to 2020 to be their saviour after a run of poor seasons.

At the end of September, the Bureau of Meteorology officially declared a La Niña event was underway in Australia, signalling the potential for a wetter than average harvest period for certain parts of Australia.

La Niña is a phase of the El Niño Southern Oscillation (ENSO), which describes ocean and atmospheric circulations over the Pacific Ocean. During a La Niña phase, waters to the north of Australia are warm which increases convection, allowing more moisture to be lifted into the air than normal.

La Niña typically increases the chance of above-average rainfall across much of Australia during the spring months. In the summer period, above-average rainfall is usually restricted to eastern Australia. The chances of flooding are significantly enhanced during a La Niña cycle, and this could spell disaster for winter crops awaiting harvest. The later the onset of La Niña, such as this year, the more concentrated the higher rainfall is to the eastern states.

This year has been one to forget for many reasons, and most Central Queensland winter crop farmers will be adding a poor harvest to their list. A lack of pre-crop and in-crop rainfall reduced the seeded area and resulted in below-average yields across most of the region.

Ideal weather conditions have accelerated early harvest activity in southern Queensland and northern New South Wales. Headers are working overtime to reap as much of the 2020 crop as possible ahead of a significant wet change that is expected to roll into the eastern states later this week.

The Global Forecast System (GFS) is a weather forecast model produced by the National Centers for Environmental Prediction (NCEP) in the United States.

According to the GFS model, eastern Australia is in for an absolute drenching over the next fifteen days, and if this forecast comes to fruition, I can give you an early Melbourne Cup tip; look for a proven mudlark.

The Southern Queensland harvest has been in full swing for a couple of weeks now. While yields to-date have been disappointing for most, the quality has been extremely good with as much as 50 per cent of wheat samples arriving at delivery depots in the western and southern Darling Downs high in protein and going into the APH1 bin.

Early quality reports from northern New South Wales are similar which is quite surprising considering the flush season experienced this year. Plenty of APH1 quality is also being reported as well as barley that is struggling to make malting quality due to high protein.

This quality trend is unlikely to be sustained as the east coast harvest moves south with ASW and APW grades expected to dominate wheat receivals. However, the forecast rains could throw a big spanner in the works as the big crops will be highly susceptible to quality downgrading. One thing we do know is that no matter the quality, New South Wales is on course for record wheat production, easily outstripping the benchmark set in 2016/17.

Harvest is underway in the Geraldton zone and eastern parts of the Kwinana zone in Western Australia. It has been another dry year in the west but reports from the field suggest that the crop has held up better than expected and will certainly be much bigger than last year. The Grains Industry Association of Western Australia (GIWA) released their October crop report last week, and the production forecast appeared very pessimistic. Time will tell I guess!

Production uncertainty in the west and quality concerns in the eastern states have slowed grower selling to a trickle ahead of harvest, particularly for cereals. After a run of poor seasons, the challenge for the New South Wales farmer is solving immediate cashflow requirements with many resorting to forward canola sales to solve the conundrum.

While rain in northern New South Wales and Queensland would be a godsend for summer croppers, the potential impact on the quality profile of the winter crop is quite concerning. Weather forecasters have not had a good run when it comes to rainfall predictions so far this year, much to the chagrin of farmers countrywide. Let’s hope we can somehow dodge a bullet and keep both the winter and summer crop growers happy over this year’s harvest period.