Market to 50,565 farmer members and get higher indexing through the search engines. 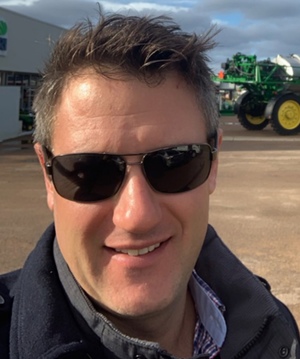 It is often said that first impressions count for everything.

Southern New South Wales cotton grower Gavin Dal Broi has firm memories of his impressions of cotton.
Aged 22, he was driving with Ross Harvey, a cotton merchant to Scott Begbie who was one of the first growers from the Hay region.

“As we were driving, I saw a paddock full of cotton,” Gavin said.

“I turned to Ross and said, ‘That has got to be the ugliest crop in the world, I’m never growing it.’”

But eight years later, there Gavin was, growing his first cotton crop; and in his own words, since then, he has not looked back. The Dal Broi's property is a mixed farming enterprise.

On the plains west of Griffith, Gavin Dal Broi and his family spend their days farming on their property.

Their operation is a mixed enterprise, growing irrigated cotton and winter cereal crops. The farm has six employees, including Gavin and his father, but during picking time, the workforce can double.

“It got to the stage where there was no market for the corn we were growing, and rice’s water usage had gone through the roof; so, we had to look for other options,” he said.

“We assessed how our business was performing and decided that growing cotton would help us secure a strong gross margin. Compared with other crops, cotton was theoretically going to improve our financial position by four.
“We’ve never looked back.”

Part of never looking back has been engaging with the cotton industry’s best practice program, myBMP.
“We’re half-way through the process for accreditation in myBMP,” Gavin said.

“It’s been a whirlwind few years as we’ve really delved into it, but it’s absolutely critical growers are engaged in the process and working at best practice.

“As the business scales up, if you don’t learn the best practices from the start, you’ll struggle to implement them as you get bigger.”

Gavin said his farm had particularly benefitted from improving its administration and human resources capacity.

“We felt, as farmers, we weren’t ‘professional’; but as we improve our farm, we need people that are skilled, knowledgeable and intelligent - just a proper workforce. myBMP has ensured we have the systems in place to operate at a high level around those managerial aspects of the business,” he said.

Gavin said his operation had learned valuable lessons out of myBMP.

“I’d recommend other growers start the myBMP process. It’s not as daunting as it looks – particularly if you break it down into stages.

“Once you’ve got it done, it’s done. It improves you, and you can look back and discover issues you’ve never known before.
“I’d also say to other growers, don’t be afraid to employ someone. If you employ good people and have the processes in place to support and nurture them, it will be a great thing for your farm and community.”

Supporting the local community is a key focus for Gavin and other cotton growers in southern NSW.

“With three gins down here, as well as pickers and machinery that has been bought, that is nearly $200 million alone that has been invested into the local community through the cotton industry,” he said.

“Not only is that extremely important because it helps everyone’s financial position, but it gives the community very good job prospects.”

“To give an example, the town of Carrathool was dying,” Gavin said.

“But a gin came along, new homes were built, and now the population is doing well there. That growth is thanks to the cotton industry, and its really positive to see how regional communities are thriving.”

Gavin is the current Chair of RivCott.

Moving forward, Gavin said growers are optimistic about the end of the drought and a return to normal seasonal conditions.
“We’ve been preparing our land as best we can, and as soon as the drought breaks and we can get some decent water allocations, we’re primed to grow one of our best crops yet,” he said.

“Once we’re back to normal farming operations, there will be a jobs boom around Griffith, with farmers needing workers. We’re very excited for that.

“Once we get two or three good seasons under our belt, the sky’s the limit.”