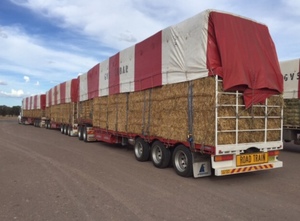 AgForce has applauded the State Government for its decision to continue offering essential drought support measures for a further year as drought conditions continue across much of Queensland.

In particular, the continuation of the fodder, water and livestock freight assistance – originally to be discontinued at the end of the financial year – will give producers confidence that industry will be able to engage with the government about improved drought assistance during the next 12 months, without producers potentially losing access to existing support.

These measures provide vital financial support for producers struggling with the ongoing dry weather – and little prospect of winter rain – as well as the effects of COVID-19.

AgForce wrote to Minister for Agricultural Industry Development and Fisheries Mark Furner last month requesting that these assistance measures be continued for another 12 months before a transition to new arrangements started, allowing initial discussions on better alternatives to freight assistance to continue.

AgForce Drought Working Group Chair Mark Collins said this was great news for the many producers still struggling with ongoing dry conditions, with more than two-thirds of the state still confirmed as being in drought.

Producers in these areas, and any areas declared within the next 12 months, now have the confidence of being able to continue to access the existing assistance measures.

“AgForce has been warning politicians and the community for months of the danger of thinking the drought was over just because we had a bit of rain at the beginning of the year,” Mark said.

“The drought is still very much with us and producers continue to feel its effects.

“We look forward to engaging strongly with the Government to ensure that crucial improvements to existing drought assistance measures are made.

“We don’t want to transition to a new system of drought support when no better alternative to the existing freight subsidies is being proposed – let’s have a real discussion about better ways of financially assisting farmers battling this and future severe droughts. ”