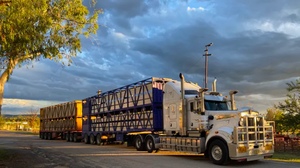 Arthur ‘Artie’ Russell manages a livestock carrying company based out of northern NSW, where he also works with hay. He uses fodder to keep his business at a constant flow throughout the drought and he’s now busy carting cattle since the drought has eased.

A frequent user of Farm Tender, he noticed the option of DelayPay to help farmers get ahead, and he was instantly on the phone to Dwain.

“My first impression of the company was really good,” says Artie.

“Dwain was really easy to get along with from the get-go, and now I deal with Kelsey who also knows his stuff. He keeps you updated with everything that’s happening, which I really appreciate.”

By using DelayPay as a tool to moderate cashflow, Artie has been able to build and grow his business even further. It’s also placed him in good stead with his suppliers, because we ensure they get paid on the spot.

And it’s not just keeping the trucks moving that Artie uses DelayPay for. He recently got into a pickle with some work lined up in the west that needed the help of extra trailers.

“They called up saying the road needed to be changed, and so I was in a position where I needed to get a hold of extra cashflow to buy another trailer to actually do the job,” he explains.

“Normally it takes some time to get that money approved, but as soon as the problem arose, Dwain popped straight into my head. I called him instantly and all he had to say was, ‘leave it with me’.”

DelayPay was able to get the funds through to the supplier within 48 hours, and next thing Artie knew, the truck was on the road carting cattle.

For Artie, it was the people behind the brand who really made things easy for him.

“Working with them was really good. By having up to six months to pay the loan back it gave us that flexibility we needed,” he says.

“That’s really good, I reckon, especially with the drought. People are in tight situations, and you get a good time frame to pay it all back.”

Unlock your potential just like Artie did and use DelayPay to buy what you need, when you need it.

No paperwork, and no strings attached- you choose the terms that suit your business!