Market to 44,857 farmer members and get higher indexing through the search engines. 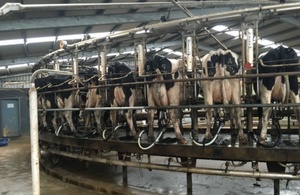 This article is bought to you by Victorian State Marnoo Merinos Field Day and Elmore Compost.

Advocacy group Dairy Connect today welcomed news from the Heart Foundation that fresh cow's milk did not contribute to higher human cholesterol and would not damage human health.

CEO Shaughn Morgan said that, to an extent, the Heart Foundation's findings told consumers what consumers already suspected, but it was refreshing for the dairy sector to be given an independent, professional tick for health and nutrition.

"A decade or more ago, the conventional wisdom was that dairy milk was a major cause of heart disease and high cholesterol levels in humans but not anymore," he said.

"This mistaken belief resulted in households switching to alternatives – such as fake ‘milks' – and the humans in those households were denied the proven nutritional benefits of fresh dairy.

"These benefits are particularly important in children managing the health effects of their journey towards adulthood."

The Heart Foundation's updated advice on dairy was based on a substantial review of current evidence, according to a statement released today.

The Heart Foundation convened an advisory group of cardiology and nutrition experts to discuss its evidence and advise on a final position.

Director of Prevention at the Foundation, Julie Anne Mitchell, said there had been a substantial shift in public health nutrition research and the Foundation wanted to ensure its healthy eating guidelines were underpinned by the best available evidence.

"What we found was that in regard to dairy, the effect of low-fat versus full-fat milk, cheese and yoghurt on heart disease risk was really quite neutral. So, our advice is changing," she said.

"Now, instead of recommending low-fat dairy, we advise that full-fat is fine too."

Shaughn Morgan said today that the health benefits delivered by fresh nutritional dairy milk were on the public record.

"Milk also contains nutrients including B vitamins for energy, vitamin A to help maintain a healthy immune system and calcium which helps build and maintain bone strength for growing children."

"Since more than 90 per cent of the population falls short of the recommended three daily servings of milk and milk products, putting milk on the table at mealtimes can play an important role in healthy eating and well-being through adulthood," he said.