Market to 49,483 farmer members and get higher indexing through the search engines. 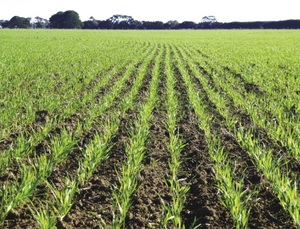 Thankfully for WA growers most of the state has received some very welcome rain over June to get the crop out of the ground, hopefully setting it up for an average or above average season. Warm conditions in early June promoted rapid growth of the crops that were lucky enough to have the moisture to get them out of the ground and these are now looking very good.

Unfortunately, there was also some horrendous wind conditions with peak gusts over 100km/h that produced soil erosion issues and crop damage for many areas of the state from Binnu to Beaumont with re-seeding required for some crops. Reports from growers of re-seeding patches 3 times because of damage from subsequent wind events continuing to affect crop growth. Getting the coverage that will stabilise the soil and stop this devastation of the landscape has been challenging (to say the least).

Wheat markets have remained bearish throughout June with 20/21 APW1 MG FIS KWI falling below the $300 FIS mark for the first time this year. One factor affecting the weakness is that the CBOT wheat futures have steadily declined and dipped below 500USc/bu last week and has been trading 480-495 USc/bu since falling below the level. The northern hemisphere harvest has begun with reports of quality and yields being a little better than expected also putting pressure on pricing.

Closer to home, east-coast crops continue to look very good with ABARES prediction of a plus 25 million tonne Australian wheat crop if conditions remain favourable, something that hasn’t been achieved since 2016 and has only happened six times previously. This could potentially put further downward pressure on pricing if world production remains as predicted at approx. 767 million tonnes.

Barley production is tipped by ABARE at around 11 million tonnes and if achieved will be only the second time this has happened with 2016 being the other season. The fact is that pricing has remained fairly stable in June with barley finding support after the Chinese tariff’s announcements in May. New crop 20/21 Barley has been able to maintain levels between $240-$250 mt FIS KWI which has been a good result. Old crop 19/20 prices should remain buoyant with anticipated tight stocks ahead of the new season’s crop.

The canola crop is looking good through SA, VIC & NSW and the expectation is for tonnages to return to the ten-year average of around 3.2 million tonnes. The KWI FIS price of Non-GM canola in June has fluctuated between $605-$630 with it closing the month at $612. The spread between Non-GM and GM canola is still historically wide, tracking at nearly $100 between the two for most of the month. It will be interesting to see if this trend continues into the back half of the year or starts to narrow as we get closer to harvest as it traditionally does.

Footy also made a comeback in June, with some very surprising results over the month. The mantra from the AFL this season is that clubs will need to be flexible and agile to be able to complete the remaining fixtures and as growers in 2020 I think from a marketing perspective you may need to have a similar flexible approach to your grain marketing taking the opportunities as/when they present.