Market to 44,871 farmer members and get higher indexing through the search engines.

AWB - Conditions are as bad (if not worse) than last year 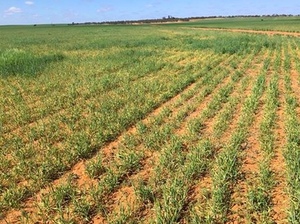 This article is bought to you by Extend Security.

Well what a week in sport! You have the Raiders who have been promising for some time finally get through to a Grand Final for the first time in 25 years, the GWS Giants in the AFL, who obviously played their Grand final a week too early and the Wallabies - well they are a bit like the Australian grain market at the moment - all over the shop.

Currently many growers are questioning the current state of play when it comes to crop pricing on the eastern seaboard. Feedback from growers currently suggests that conditions are as bad (if not worse) than last year and, along with reported frosting in South Australia and in some parts of Western Australia, are asking why the Australian market has not started to rise as it did this time last year. At present it all comes down to the demand for wheat inside or outside of Australia. Last Friday the EU commissioned a report increasing their 19/20 EU wheat production estimate by another 2.3 MMT to 145 MMT, coupled with USDA data showing a rise of 16% in export wheat sales which reduced the negative news of the Canadian harvest slowing down due to weather concerns. This produces a negative effect for Australia of being able to export grain as Australia is still too dear in the world market.

Ad - Farm Security is more important than ever, contact Extend Security and keep those intruders at bay - Ad

As I have explained in previous articles, the consumer over-committed last year at harvest, paying overs for grain which is great for the grower… but that has now resulted in a low trading environment, and the consumer living more hand to mouth. It could be that the consumer may have more stock in reserve to elevate the pressure to purchase stock at harvest time, but we really don't know as it currently stands. Regardless of the situation the consumer is currently in, they will still need to purchase grain at harvest time to sure-up stocks and it will also help to spread their risk profile throughout the year. If you are lucky enough to have some grain this year, the flour millers will purchase 80% of their high protein milling grades by February of each year. While the other domestic market players being feedlots, poultry, dairies will all stay very short on tonnes, hoping that each time they purchase grain their competitor has purchased it dearer than what they have resulting in a better margin for them.

There is no doubt that margins will be tight on the seller and consumer sides, and each party must look for ways of being able to get the best result for themselves. To me that is where some opportunities lay, that being transporting to grain facilities that are closer to end-users or who are preferred out-loading sites that attract genuine competitive interest from buyers. Each and every grower must look for any advantage that can help their bottom line in the current environment. In years like this, it is all about surviving the best you can.

Ad - Farm Security is more important than ever, contact Extend Security and keep those intruders at bay - Ad