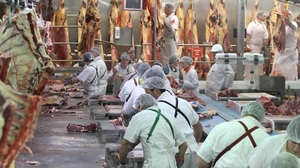 In terms of Australian agriculture exports to China namely beef and barley, Australia needs to methodically correct the imbalance between reliance and resilience, in doing so maintaining supply chains into Asia and not decimating income to our farmers.

More broadly than Agriculture Australia needs to inflict some tough love on itself which may lead to more economic pain the short to medium term.

Our reliance on imported goods, be they pharmaceutical, household or otherwise from China needs to stop for the betterment of the country our children inherit and the generations that follow.

This does not mean we need to stop trading with China.

We simply need to cut our reliance and increase our resilience.

For decades the possession centric mentality of the western world has prospered consequent to the affordability of a myriad of items afforded to more of us virtue of cheap labour and goods from China.

Our household’s and livelihoods are literally adorned with goods manufactured in China as so eloquently depicted in an episode of The Simpsons where a ‘Made in China’ sticker peels off an item to reveal ‘Made in China’ written underneath.

As the saying goes pay peanuts and get monkey’s Australia has contributed to a near monopoly of cheap manufacturing coming out of China and now we are the monkey’s left holding the can of ‘complete over reliance’ very much to our own detriment.

Regions such as the UK, countries such as Japan and The USA are all seeking to divest importation reliance on China and Australia needs to be part of such re-thinking and discussions now as to be part of revamped global trade structures, supply chains and opportunities.

As Alan Jones has said previously and recently in terms of foreign ownership and the foreign investment review board it does not matter who is in Government between the ALP and NLP in you don’t own the country.