Ag Tech Sunday - There’s a Meat Vacuum in Ag Tech; how do we fill it? 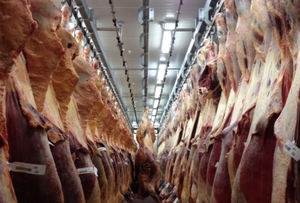 $16.9B in venture funding went to agtech companies in 2018. Sensors, robotics, machine learning, CRISPR, plant based <anything>, wearable tech for livestock, and so on. A ton of activity in row crops, a lot of activity in dairy, some interesting plays in livestock…but what about the meat sector?

What about that massively critical phase from the time an animal leaves the farm (swine, poultry) or feedyard (cattle) until it shows up on the front step of a retailer, foodservice, or consumer. Where’s the venture backed innovation in that space?

Think of all that happens in that black hole from plant gate to table:

All of this complexity while operating in a world where consumers increasingly expect transparency and sustainability.

The meat value chain is complex, it’s capital intensive, and it’s a bit of an innovation black hole with very few venture backed businesses working within the sector.

So disruptors are coming from outside. And from the outside, it appears the best way to disrupt the meat business is to replace the most complicating factor about it: the animal. More than $2B dollars have been invested into plant based meats alone!

But why isn’t more venture capital being deployed to tackle the problems *within* the meat industry? To radical innovation that allows consumers to feel great about eating meat? To allow producers to feel good about their relationship with the rest of the value chain? To drive cost out of the system (something this industry knows how to do!) and expand industry relevance and revenue (something slices of the industry know how to do).

Is it because the market isn’t big enough? Negative.

Is it because the industry isn’t interested in innovation? If you can show ROI, companies will follow the money.

Here’s my hypothesis: the lack of venture backed startups solving problems in the meat industry is because the meat value chain is essentially a black box to those outside the industry. Within the industry, game-aware leaders know where the industry needs help. They know the big problems that need solving. And they need outside innovation but often don’t know where to go to get it, for a few reasons:

The upside of the venture capital subsidized plant meat venture backed ad frenzy is that meat is a relevant topic right now. More and more people – and entrepreneurs – are interested in the meat industry….but they don’t have first hand, up close experience with the problems that – if solved – could elevate the industry.

What if there was a way to get the big players to bring identified unsolved problems to the table, and entrepreneurs to bring startup scrappiness and fresh views, and bridge the gap that’s prevented the meat industry from benefiting from the Agtech boom?