Market to 45,930 farmer members and get higher indexing through the search engines. 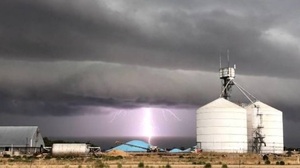 Last week we saw the Bureau of Meteorology release its updated forecast which remains in favour of the East Coast cropping belt to experience slightly higher than average rainfall from June to August. Albeit the overall rainfall outlook as a percentage has declined, the forecast is very much in favour for the cropping season which is in addition to much of the South Australian, Victorian, and New South Wales grain growing belts already positioned on close to full sub soil moisture profiles.

While the majority of East Coast is looking fantastic, the opposite can be said for Western Australia and Queensland where that state is yet to experience a reprieve since the Jan/Feb deluge. These states remain on a weather watch where production cuts are expected if June rainfall disappoints.

At present the dominant climate drivers are the Sea Surface Temperatures (SST) which have begun to cool, in turn affecting the Indian Ocean Dipole (IOD) that by no means have turned positive, it has begun to strengthen suggesting a La Nina season is becoming less likely. If the trend of cooler SST’s continues, the outlook is expected to firm for an average to slightly above average winter rainfall accumulation.

Looking at global markets they continue to remain a muddled mess of currency, demand, execution, a portion of weather, and all things China. Canola markets are lacking excitement where export bids have been lackluster and the European benchmark trading a relatively tight range on small volume. Canadian rapeseed supplies are expected to tighten further than initially forecast which may add a bullish input to the market. On the flipside, COVID-19 has seen demand for oil decline due to lower bio-diesel, ethanol and consumer consumption.

Wheat markets continue to trade around the weather with speculation regarding the current conditions through the Northern Hemisphere dominating headlines as harvest nears. The European crop appears challenged of late where lack of rain and above average temperatures have hindered crop prospects. Meanwhile rain across the Black Sea has been suggested as too little too late reducing crop estimates to below 80Mmt, which is about 5Mmt lower than a month ago. Also worth a mention, the narrative of late has been the idea that Russia wants to build stock reserves of 6Mmt.

The Australian dollar is proving to be a challenge of late trending higher and at time of writing, breaching 67c which is the highest its traded since mid-February this year.

With the majority of sowing completed in New South Wales, farmers now have time to give more thought to their marketing programs for the upcoming harvest. At current values (dare I say it), canola is shaping as best value where at a Port Kembla track basis is currently bid 1.93 times that of wheat and 2.52 times that of barley. With global demand for oilseeds remaining clouded and majority of the crop emerging from a full profile of moisture coinciding with decile 9 prices, maybe it is time to consider getting some runs on the board.