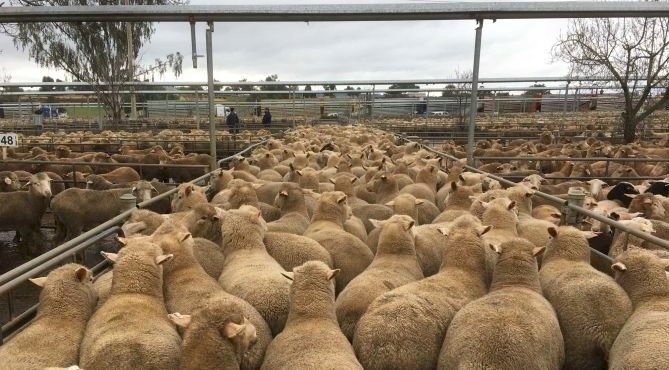 Agents mustered significantly more lambs culminating in a winter record for the centre. A large portion of the offering were grain assisted. Trade lambs were in bigger numbers, with some pen lots requiring more finish. In total there were 5,800 new season lambs with most falling into trade weight categories. A full field of buyers were at the rail. Domestic buyers noted demand remained very strong from consumers. Because of the extremely large yarding prices at times were quite erratic.

Trade lambs sold to fluctuating price trends which was mostly quality related. Lambs weighing 22 to 24kg were unchanged to $2/head dearer to average 983c/kg cwt. New-season lambs sold to patchy competition with buyers not prepared to chase the market, which resulted in mixed price trends. New-season lambs made from $173 to $248/head. A single pen of extra heavy young lambs made $268/head. Merino trade lambs sold to the usual group of buyers with prices averaging from 782c to 829c/kg cwt. Restockers mostly operated across new season categories which saw prices range from $142 to $167/head.

It was a mixed quality yarding of mutton. However, there were some excellent extra heavy sheep amongst the offering. Not all buyers attended or operated across heavy or trade categories. Heavy ewes ignited the bidding making from $178 to $270/head to average 643c to692c/kg cwt. Heavy Merino wethers sold from $240 to $288/head to average 741c/kg cwt. Trade sheep were mostly shorn with very few in longer skins. The bulk sold from $138 to $177/head.