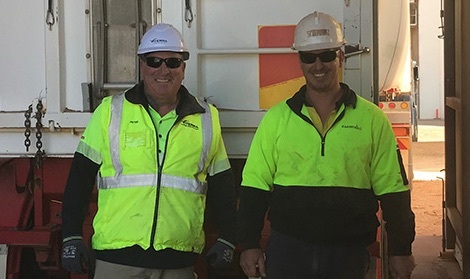 “It’s a fantastic effort by our employees who are managing these big receival days safely and efficiently,” Michael says.

“We thank all our grower and carrier customers for their continued support and helping to ensure operations are running smoothly on site.

“Our supply chain has adapted and continued to operate through COVID-19 restrictions and it’s very pleasing to see the efforts and support of growers, carriers and employees during this time.

“The warmer weather has given growers the opportunity to have a good run of harvesting and with this, we continued to extend our opening hours.

“Our flexible opening hours have been well received by growers and we’ll continue to work closely with them and respond to their needs to ensure we are providing a valuable and efficient service.”

Over 430,000 tonnes were received into the Western region last week taking total tonnes over the one million tonne mark for the region.

“This is the region’s second record breaking day for the 2020/21 harvest after our Lock site broke its record last week.

“It’s great to see records being broken as growers start to really get going with harvest.”

The Central region received the most grain last week with over half a million tonnes delivered into sites taking total receivals for the region to over one million tonnes.

Viterra Central region Operations Manager Jack Tansley says the region received the same tonnes in the last week as the past seven weeks of harvest combined.

“All sites in the Central region are now receiving grain after our Eudunda, Saddleworth and Jamestown sites received their first loads,” Jack says.

“Our lentil receivals peaked last week as we saw very large volumes into Ardrossan, Saddleworth and Jamestown, and we’re seeing more wheat deliveries as the barley harvest finishes up.”

The Eastern region also had a busy week with extended opening hours.

“Our Bordertown, Coonalpyn and Wolseley sites all received their first loads last week, as harvest picked up across the region,” Jo says.

“We also had a daily receival record broken two days in a row in the east, when our Werrimull site broke its record on Tuesday and Wednesday from its previous 2016/17 harvest record.

“The site received over 5,061 tonnes in one day, which is a great achievement for employees, growers and carriers.

“This season we have employees from our Dooen site operating Werrimull for the first time and they are doing a fantastic job managing the harvest safely and efficiently.

“We’re still in the earlier stages of harvest in the region, so we expect to see a few more big days in the coming weeks which growers and our employees are excited about.”

Sign up to receive our weekly harvest report into your inbox.

* This data is subject to variation due to individual site operations and the timing of reports.