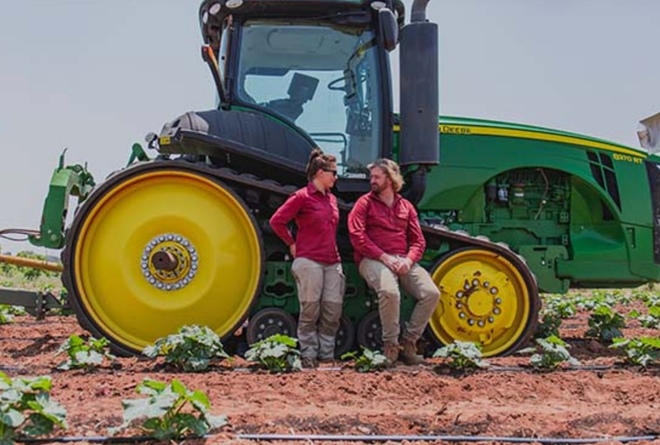 Wattle Organic Farms in north-west Victoria are keeping Australians healthy and well-fed, each year producing a little more than 1300 tonnes of organic broccoli, pumpkin and stone fruit – that’s 100,000 shopping bags stocked to the brim with fresh fruit and vegetables!

Nathan Free, a fourth generation horticulturist, and his parents, Kelvin and Deanne, are passionate about growing healthy organic food and supplying consumers with the best product.

“We made the decision to go organic about 12 years ago on the philosophy of providing healthy food for our customers,” Nathan said.

“In the process we converted ourselves over into eating organic and now we wouldn’t farm any other way.”
The majority of their produce is sold to Woolworths Supermarkets through Wattle Organic Farms, which is run by Nathan.
“Wattle Organic Farms is a stand-alone business which we established about 10 years ago to attract supermarkets and export customers,” he explained.

“Today we supply Woolworths with the majority of the Kent and Butternut pumpkin grown on our Lake Boga property and supplied across the eastern seaboard of Australia – from March through to September-October. During that time, we do probably the majority of the broccoli program for them as well. Then, from November through to early March, we supply stone fruit to Woolworths.”

In total, Nathan said they produce about 500 tonnes of broccoli for the whole season, about 300 tonnes of each of their pumpkin lines, and about 220 tonne of stone fruit.

They also export about 10% of their produce to Asia and United Arab Emirates.
Despite COVID-19, Nathan said they have been able to keep Woolworths shelves stocked with the lines they produce, although there were some challenges at the start.

“Product demand at the onset of COVID-19 was like Christmas trading week, only it was unexpected and went for three or four weeks."

“The issue was getting our produce to the store through the transport network which was under pressure. But Woolworths dealt with the issue very, very well, kept everything rolling and made it possible for consumers to get the product off the shelf.”

Despite appearing to be contradictory, COVID-19, in a way, brought the Free family closer to consumers as they developed a boxed delivery service for neighbouring towns.

“People were actually driving between towns to pick up their deliveries,” Nathan said.

“We have also seen a big shift in how people want to eat their food. The predominant part of our pumpkin line is cut for market, but we have added a new line of whole pumpkins because that’s what consumers are looking for.”

Nathan believes that the farming community as a whole is very passionate about doing their job, providing food for consumers.

For his own family, this year that meant putting in an even bigger effort before COVID-19 even hit because of drought, very low water allocations and high water prices.

“We moved out of our comfort zone so we could plant our crops and make sure there was still going to be food on the shelves,” Nathan said.