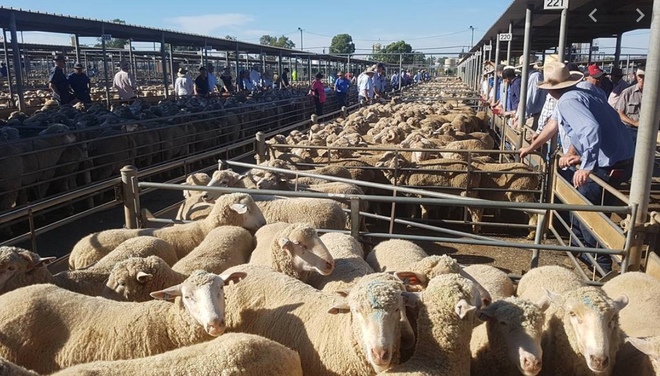 Yarding - 57,000 (+4000).
Lambs - 44,000 (+1000).
Sheep - 13,000 (+3000).
Lamb supplies increased significantly. The quality of the new season lambs was exceptional over trade and heavy lamb categories. Most old lambs were only fair except for the extra heavy portion. A few more restockers entered the market due to bigger supplies of lambs weighing less than 20kg carcase weight. A full field of buyers were in attendance however not all operated to capacity which caused the market to fluctuate particularly across heavy export classes.
In the trade market for the second week running Victorian processors were again subdued. Despite the outstanding selection of young lambs, prices were wound back from $9 to $16/head. New season lambs from 22 to 24kg averaged 759c/kg cwt. Merino trade lambs sold to weaker competition, the bulk of these lambs made from $165 to $178/head. There was a mixed selection of lambs to suit restockers, most weighed below 18kg cwt. The general run sold from $126 to $195/head.
A full field of export buyers were at the rail, however competition was very patchy at times. Heavy and extra heavy new season lamb prices slipped back by $20 to $27/head. New season lambs weighing from 26 to 30kg made from $189 to $224/head. Lambs weighing in excess of 30kg cwt sold to less buying activity, making from $220 to $226/head to average 683c/kg cwt. Extra heavy old lambs recorded a top price of$244/head. Heavy Merino lambs sold from $204 to $224/head.
It was a very good yarding of sheep and not all buyers operated. Heavy ewes sold to weaker demand to average 629c/kg. Trade gained $10selling from $143 to $167/head. Heavy Merino wethers sold from $186 to $224/head.
https://wagga.nsw.gov.au/business-investment/council-businesses/livestock-marketing-centre

**List your Sheep, Cattle, Rams, Bulls or other Livestock on our new Digital Livestock Exchange (powered by Farm Tender). From 1% commission if you sell. Reach between 8000 - 10,000 potential customers per day. Contact our Livestock Marketing team in Hannah Anderson on 0429 479 072 or Bruce Watson 0427 514 248  for more information. Like our new Facebook page here