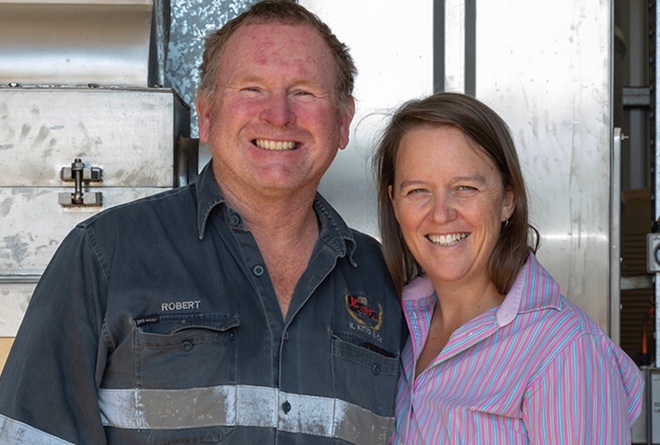 Lupin growers Rob and Tanya Kitto are introducing consumers to a whole new range of healthy and delicious foods.

Their local operation, Erangy Spring Farm, covers 11,000 hectares near Geraldton in Western Australia, where they grow lupins, wheat and canola.

But it’s through their lupins that Rob and Tanya are tempting consumers’ taste buds and providing nutritious, gluten-free food.

While lupins have been traditionally used as stock feed, the Kitto’s recognised their value as a healthy food source for people – leading them to establish My Provincial Kitchen, which supplies everything from lupin flour to ‘Bake at Home’ mixes for biscuits, brownies, muffins and pancakes.

“We have seven retail products available now with another to be released soon, and everything is going well," Rob said.

“Tanya handles everything in My Provincial Kitchen, from marketing, packaging and everything else, while I look after growing our crops.”

Tanya added that both she and Rob liked to come up with new ideas for lupin-based products for the business which they then run by their experienced recipe developer.

“She creates our recipes and has a lot of knowledge about food and the gluten-free market,” Tanya said.

“Our products are for families that want gluten-free food that is yummy.

"It’s the type of food that you would treat yourself to in a café or would be served up by your grandmother."

“They are also very palatable for people who are not gluten-free, and the added element that the lupins bring to our mixes is a boost in nutrition.”

A sixth generation farmer, Rob has continued a family tradition of growing lupins started by his father in the late 1970s.

“Lupins help improve our sandy soil. They are a very deep tap rooted plant and they dig down into the sand very easily, leaving a lot of goodness behind off their root systems.”

“Over the years, the volume of lupins we’ve grown has varied. Before we added canola, and our farm was 50 per cent lupins and 50 per cent wheat, we were one of the biggest growers of lupins in the state,” Rob said.

With lupins such an integral part of the farm business, Rob has always had a strong focus on finding ways to bring them to market.

“Twenty years ago marketers regarded lupins as a bit of a hassle and didn’t put a lot of effort into marketing them for what they are,” Rob said.

This led Rob to developing his own marketing avenues, starting with building on-farm storage for 10,000 tonnes of lupins which could be sold throughout the year as stock feed, mainly to dairy farmers and chicken producers.

He also built a flour mill on the farm and established Golden West Foods as a way to get lupin flour into bakeries.

Rob then thoroughly investigated avenues for getting his product into the export market, before deciding to concentrate on the domestic market.

“We thought we really needed to get lupins into the Australian market for human consumption and that’s when My Provincial Kitchen was born.”

And consumers turned even more to their range of products in the early days of COVID-19.

“People went crazy ordering products because they were a bit scared about access to food,” Tanya said.

“April was our busiest time and we saw about four times the volume of sales we generally have in a month. I literally had to put everything else on hold to be able to meet the demand.”

While the panic buying may have been good for business, Rob pointed out that Australia is more than capable of producing enough food for everyone who lives in the country.

“We can produce the food, but we have to be sure that it can be processed,” he added.

Being able to provide food for people is one of the main driving forces for Rob.

“It gives me a great thrill to produce crops year in and year out to feed others. That’s the charter of the farmer – to produce food for people who can’t produce it for themselves.

Agreeing with Rob, Tanya said it was a great privilege to be able to work the land and grow food for people.

Picking up on Tanya’s comment, Rob said it was a real privilege to be the custodians of the land.

“It’s our responsibility to look after the land and to make it sustainable for future generations,” he added.