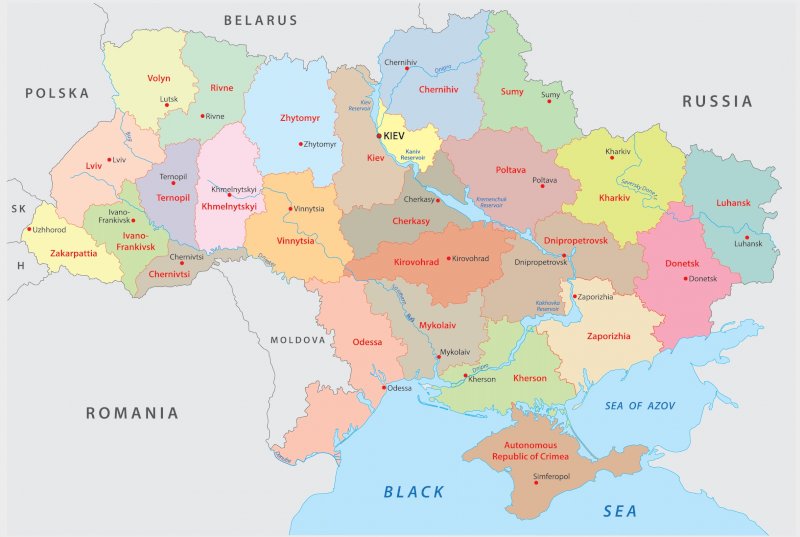 The winter harvesting campaign is in full swing across Ukraine, one of the most important producers and exporters of agricultural produce in Europe. Expectations are high for record production this season, but adverse weather conditions in the first half of July threaten to take the gloss off crop quality and final yields.

Winter wheat made up the majority of the output with 8.86MMT in the bin off 2.68 million hectares. That is an average yield of 3.31 metric tonne per hectare (MT/ha) and constitutes 30 per cent of the forecast wheat area.

The bulk of harvest thus far has been confined to the south of the country, with the oblasts of Kherson, Mykolayiv and Odessa on the Black Sea 69 per cent, 60 per cent and 29 per cent completed, respectively.

Further east, harvest in the war-torn provinces of Luhansk and Donetsk is 44 per cent and 39 per cent completed, respectively.

The Ministry of Agrarian Policy and Food predicts the harvest of grain and legume crops in the 2021/2022 marketing year will increase by 17 per cent compared to last season, to a record 75.8 million tonnes. The forecast was made up of 37.1MMT of corn, 28.5MMT of wheat, 8.3MMT of barley, 0.6MMT of peas and 0.5MMT of oats.

The International Grains Council released its latest global crop update earlier in the month, and they pegged total Ukrainian grains production slightly lower at 74.2MMT. It called the wheat crop 27.2MMT, corn output 37.3MMT, barley production 8.1MMT, and the canola harvest 2.5MMT. The USDA upped its Ukraine estimates earlier this month on the back of favourable June weather to 30MMT for wheat, 37.5MMT for corn and 9.2MMt for barley.

A rebound in winter crop production will mean higher exports in the 2021/22 marketing year, particularly over the next six months. The ministry of agriculture data released last week called total grain exports 56MMT, including 20.7MMT of wheat, 30.7MMT of corn and 4.1MMt of barley.

The IGC was a little more conservative, forecasting total exports at 53.1MMT, made up of 19MMT of wheat, 29.6MMT of corn, 4.3MMT of barley and 2.0MMT of canola. The USDA has wheat, corn and barley exports higher at 21MMT, 30.5MMT and 5.2MMT, respectively, on the back of their higher production expectations.

The latest official statistics put Ukraine wheat stocks at 1.74MMT as of July 1, 4 per cent higher than a year earlier, and corn stocks have increased 13 per cent to 2.29MMT. Farmers hold 1.18MMT, or almost 68 per cent of the wheat volume and 1.56MMT, or just over 68 per cent of corn stocks, to open the 2021/22 marketing year. On the other hand, barley stocks fell compared to the previous year to 1.07MMT due to sustained export activity.

Exports of Ukraine barley to China increased significantly in the 2020/21 marketing year, with the Asian nation becoming the largest importer of Ukrainian barley. This ended the long-standing dominance of Saudi Arabia as an export destination for Ukraine's barley, with the Middle Eastern country shifting to purchases of Australian and Russian supplies in the 2020/21 season.

Export activity in the first three weeks of the 2021/22 marketing year has been quite buoyant, with over 1.66MMT sailing from Ukraine ports. Corn has been the flag bearer at 824,000 metric tonne followed by wheat at 399,000 metric tonne and barley at 426,000 metric tonne. How wonderful it is to see such data released to the market so quickly and such a pity it takes five weeks from month end to see the same export statistics released here in Australia.

The premium for Ukraine milling wheat over feed wheat continues to widen and is approaching a three-year high amid weather-induced concerns over new-crop quality. The premium started to widen in mid-June after rain and above-average temperatures at the beginning of the month boosted the spread of plant diseases. Combined with strong winds, widescale lodging became apparent in some areas, which generally reduces protein content.

Torrential rain in the Odessa, Mykolayiv, Kherson, Zaporizhshya, Dnipropetrovsk and Donetsk regions in the first week of July led to localised flooding events, slowing harvest and exacerbating the lodging problem. The severe thunderstorm activity has continued over the past couple of weeks, with the rising water levels temporarily impacting some port facilities but are not drastically affecting export shipment operations.

According to media reports, around 3.2 million hectares of wheat and 1.4 million hectares of barley are affected by the wet start to harvest, 46% and 57% of the total area sown to these crops in Ukraine this year. Early new-crop wheat samples suggest that feed wheat's share of this year's wheat harvest will most likely be higher than the 30 per cent seen in the 2020 harvest.

This is already making it difficult for exporters to accumulate sufficient volumes of milling wheat to cover their export commitments, pushing export prices for 12.5 per cent and 11.5 per cent protein wheat higher. The spread between 11.5 per cent protein wheat and feed wheat in the spot export market has widened to around US$12 per metric tonne after touching US$14.50 per metric tonne on July 16, the highest since August 2018.

The widening of protein premiums is not restricted to Ukraine. The severe drought conditions in Canada are having a drastic impact on global production of high protein wheat. There are issues in the United States as well. This is already influencing grade spreads here in Australia. The flush season to date is not conducive to a high protein harvest so the recent trend could easily continue into the Aussie harvest if the seasonal conditions remain favourable.