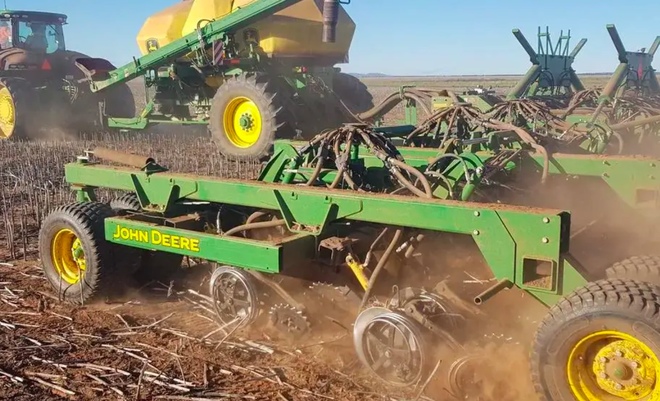 This season many farmers with disc machines were frustrated, as the high rainfall stopped them while their neighbours, with tyne machines, continued operating in the paddock. RFM NT’s latest coil gauge wheel allowed them to stay in the paddock and finish sowing in these wet conditions.

Paul Ryan of RFM NT, across the globe, has been eliminating the hassles found with rubber gauge wheel systems with his CWS2000 Coil Gauge Wheel.

Fitted with the latest RFM coil wheel technology, the self-cleaning gauge wheel, eliminates the need to replace rubber tyres, gives a smoother ride for better seed placement and is ideal for those no-till or conventional planting.

The coil wheel has seen an increase in demand from those precision planting in Australia and the USA.

Are your rubber gauge wheels still limiting you in the wet?

The recent wet winter was great for Australian farmers in the South East but in turn, it meant a challenging season for those planting crops with a disc machine.

“More and more growers are moving towards disc seeders for the benefits of having minimal soil disturbance and the ability to easily cut through heavy dry stubbles,” Paul Ryan said.

“These systems have limitations in wet conditions, especially due to mud build-up on the discs and wheels.”

“Due to the amount of rain from the 2020 planting, many of those with disc machines have become frustrated as they had to watch their neighbours, using machines fitted with tines, operating in the paddock when theirs cannot.”

Paul Ryan’s focus on farmer problems is what led to this advancement. Farmers who fit the gauge wheels to their disc machine, are in the paddock earlier and staying their longer.

“A major weak point with a disc seeder is how the conventional rubber gauge wheel cakes up with mud, which in turn forces the farmer to lose precious time as they have to get out of the cab with a paint scraper and clean them,” Paul Ryan said.

“The new RFM NT coil gauge wheel system has removed this limitation, in turn allowing farmers to be more productive,”

“We have seen great results in 2020, especially in sticky conditions, which was proven on a property in the northern Wimmera this year,”

“As the timing of getting your crop in is very important, it is great to not lose time to wet weather like you normally would with discs.”

We Analysed Growers And Here's What We Found

Paul explains the system uses a spring coil wheel, which flexes to allow dirt to pass through, in turn allowing for much better self-cleaning and no caking or smearing.

“With disc machines proving to have many benefits when dry sowing, with the coil gauge wheels, they are now proving to match a tined rig in the wet,” he said.

“The wheels are working really well, we’ve had several farmers using them this season across a range of soil types, even on those sticky black clays found in the Wimmera,”

“The release of the latest wheels, was good timing for the wet season as people needed something to help them get through the wet soils this sowing, suffice to say they passed the test with great results.”

The system is gaining popularity with farmers in Queensland and Northern New South Wales, including those using John Deere MaxEmerge row units on their precision planters.

“These farmers have been impressed by how much faster you can plant without compromising your planting operations,”

“They can confidently get out in the paddock to get the job done, knowing that the wheels won’t block up,” Paul Ryan explains.

“They’re getting a much smoother ride out of their planter than they normally would with rubber wheels, because the coils break up clods instead of riding over them, in turn giving them more accurate seed placement,” he said.

The Gauge Wheel can fit both double and single disc openers. It can suit planter and seeder units from:

The numbers are running low as most units have a name on them for next season. Get in touch with Paul Ryan now if you would like to secure yourself one of the few remaining sets. Call Paul on 0417 354 617 or email paul@rfmnt.com.