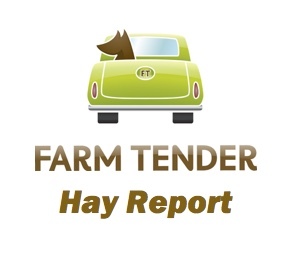 The Hay season usually throws up plenty of curve balls, typically weather-related, and I have this funny feeling this one is going to be no different. Let's park that one and hope for the best.

Doing Silage is becoming more of a trend. Talking to Sheep and Cattle producers, they are saying it's more desirable than Hay for younger Livestock. Farmers always weigh up their options and the threat of a wet period ahead means Silage is becoming more of an option. We all know it takes more effort to make Silage, and feeding it out is not as straight forward as Hay. But it's all done and dusted in no time as far as making it goes.

Curing Hay in a volatile Spring period is not for the faint-hearted.

Although the wetter September and October is a curse for the Hay job, it's been a blessing for Crops earmarked for Grain. The improvement in some of the Crops I have seen across Victoria has been dramatic; it looks like we could get along Spring for once.

One of the FT guys below pointed out that if we are going to see some damaged new season Hay, those that have shedded old season Hay might be in the box seat. Watch this space.

We are hearing of Vetch Crops podding up quicker than ever, with some growers getting caught out. Not sure if it has anything to do with the newer varieties or it's just a season-related thing.

I was talking to one Hay dealer who supplies lots of Straw and Hay into the Cattle Feedlots in Queensland, and he was trying to work out ways to iron out the feast or famine scenario that is our domestic Hay market right now. His thinking is investment more central "receival sites" for Hay (like Grain), so he can buy better and in turn, deliver a better quality product to his customers. It's not something that many haven't thought about before, but as our domestic Hay market becomes more important, we need to be thinking about how it needs to function going forward. All ideas are on the table, as the pressure is always there to keep on improving the industry as a whole.

Old season Cereal Hay prices are in and around $150/mt, and we are yet to hear of any new season pricing.

Vetch Hay prices have flatlined at around the $200/mt for the new season. Tests and quality will determine whether Protein buyers want to dip their toe into the water.

There is bugger all demand for old season Straw, but we are hearing of buyers in Queensland and Northern NSW looking for new season stuff

Paul said - We have started to see some enquiry on new seasons Vetch, but the wait is on for feed tests. There is plenty of Hay on the ground with more to be dropped. Feed tests will play a big part in the pricing of Protein Hay along with the level of weather damage. It's a mixed bag as to what damage the weather has done up to this point in time. It's still relatively early in the Hay job, so prices will be a bit up and down for a while until things start to settle down.

Shane said - Plenty happening out in the paddocks with Hay down and some being baled in Northern Victoria and Southern NSW. We have had rain on Hay that is currently down or baled, and by the look of some early feed tests, this is going to effect quality. That might bring some of last years Hay back into the frame, especially for those who have it in sheds. Demand is still low, and pricing is pretty consistent to where we will think it will end up this season unless the weather and demand changes.

Mike said - Harvest is underway in Northern New South Wales and the South Western Queensland areas. Yields are a bit of a mixed bag ranging from 3 to 18 bags depending on who got the storms. Feedlots across the Darling Downs are holding off purchasing Hay and Straw until they see what is around locally. Most are saying they have stored enough until Christmas.

Jackie said - Last week saw a few people in the South West Victoria take the opportunity to cut and bale Silage with the warmer weather. There are a few EOI listings about for standing Crops. It will be interesting to see new season prices for Fodder and how the tests compare with last season.

Catch you in a fortnight.