Sorting out succession on the Farm 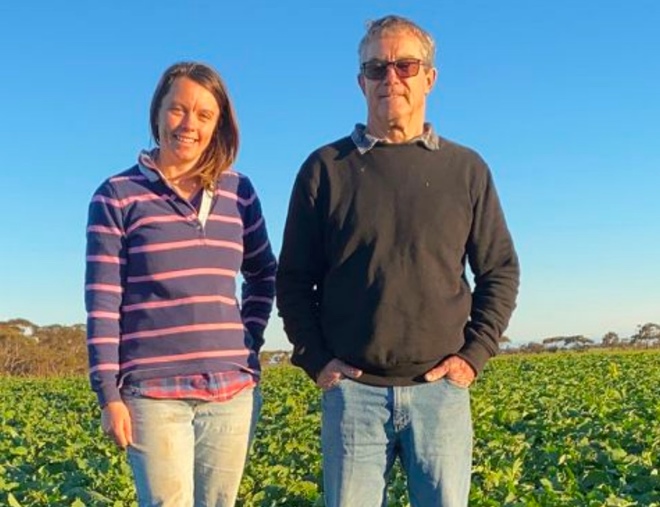 Sammy Mitchell is not sure when it dawned on either her or her father, John Mitchell, that she would be the one to take over the family cropping farm between Birchip and Sea Lake in Victoria’s Mallee region.

The second of four children, Sammy, 29, had always loved helping her dad on the property. She told her school friends she wanted to be a farmer when she was eight years old and started driving the header at harvest when she turned 16.

Her father never made her feel that being a girl would stop her becoming a grower, but – as with Sammy’s two sisters and younger brother – he encouraged them all to get a trade or tertiary education and try their hands at another job first.

“I thought about teaching, then did part of a course in sustainable agriculture at Bendigo TAFE and got a casual job, but I hated the city,” Sammy says. “Then, about eight years ago, I started coming back to the farm a few days a week and helping Dad out as the place recovered from the drought and realised I just loved it. It was then I suggested I come back and work full-time with him on the farm – I was 21, I think. Dad was surprised but he was supportive too.

“Probably like most families around here, we had never really talked with Dad … about what would happen with the farm. I think in the back of his mind, like most farmers, he probably assumed it would be Matt who would come back. I don’t think he ever thought the farm was for me.”

For the Mitchell family, what started as an ad hoc, almost casual arrangement for Sammy to help out on the 1400-hectare family farm eight years ago has now transformed into a formal farm succession plan involving all family members.

John called a family meeting when it was agreed Sammy was home for good and the pair started cropping 2800ha of owned and leased land with lentils, wheat, barley, canola and vetch hay.

Now a family meeting is held at least once a year. “Dad is really proactive about this. He wants to make sure everyone in the family knows exactly what is happening now, what will happen in the future, has an opportunity to voice their opinions about it all, and in the end is happy,” Sammy says.

“But I’m very lucky because my siblings want to see the farm continue rather than be split up. They all have good jobs and homes of their own and so support me being here.”

Advice on how to plan for succession and asset handover, with Sammy eventually becoming the main grower, has been relatively straightforward, based around accumulating off-farm assets and a shared desire to keep the family farm intact and viable. The plan has also been developed openly over seven years, with full agreement of the whole family.

The farm is already owned in several land titles or lots, and this year the main house block of 220ha will be transferred into Sammy’s name. That will allow Sammy to borrow $300,000 – using this block as equity and security – to buy out two other farm blocks of 330ha, with the money paid to John.

Meanwhile, John, 67, and his wife Kate have bought land near the central Victorian town of Heathcote, where they are building a new house for when they eventually move off the farm.

The plan then is that Sammy will lease and gradually buy most of the remaining farmland from John, although some blocks may remain in John’s name and be left in his will to Sammy’s other siblings. The Heathcote property will eventually be bequeathed too, and that legacy shared by Sammy’s two sisters and brother, but not by her.

“Our last meeting at Christmas was really important as Dad was changing his will to reflect the changes and the fact the house block was to be put in my name in 2020. I wanted to make sure all the family was happy with it and for them to raise any issues because it’s so important (in the succession planning process) that everyone keeps talking and knows exactly what is going to happen in the future.

“I’m so grateful to my family, I just love being able to farm. Dad still likes to truck (the grain) but I’ve been in charge of spraying, weed control and harvesting for a long time. I really like that we now have a financial plan and a structure that allows me to see how I can borrow money, pay out Dad a bit and lease land to crop until I can afford to buy more blocks from him. It’s great to have that all laid out in front of me clearly.”

After more than 30 years of advising families on succession planning, Mr Stephens is completing a PhD thesis analysing and discussing the difficult issue. He has seen the worst examples of how and when planning for the handover of a farm can sour.

“I’ve seen families fighting over wills, children who no longer talk to their parents, sons who convince their father to change ownership of the land to them and the daughters not finding out until the father dies, and cousins who will never talk to each other again,” Mr Stephens says.

“And they aren’t even the ones that end up in the Supreme Court, where you see people who were once members of the same family sitting on opposite sides of the court, not even able to look at each other. It is so distressing and unnecessary.”

He points out that many Australian family farms are too small and unviable to handle serious family succession planning, especially if parents are trying to provide equally for multiple children.

The latest Australian Bureau of Statistics figures show that of the 52,000 broadacre farms remaining in Australia, 48 per cent have an annual gross income of less than $230,000, which means that after costs and expenses, the best profit those businesses are likely to create is $50,000 to $60,000.

“Most family farms are carrying so much debt, are not of a sufficient size or scale, or are not running at anywhere near their productive capacity, that the concept of dividing a farm equally between children is impossible. That’s where the best option is to sell the farm and split the proceeds between the children and allow other (neighbouring) farms to expand,” Mr Stephens says.

He says his rule of thumb when advising families is that to be a viable business that can be passed on to the next generation requires (in high-rainfall states such as Victoria and NSW) a scale of at least 10,000 dry sheep equivalents for livestock producers or at least 1500 to 2000ha of land in a continuous cropping regime. Successful succession planning is a 30-year process that should start as soon as a family’s first child is born, he says.

Drier areas such as Victoria’s Mallee, SA’s Eyre Peninsula or WA’s northern wheatbelt require even more land to be of adequate size to pass on.

“If you’ve got that scale and you do it well and generally make good decisions over a few decades, you should be able to pass on the farm to one or two children and have accumulated other assets off-farm to be shared among the other children who don’t want to be farmers,” he says.

In a 2019 survey, agribusiness lender Rabobank found that while succession planning within Australian farm families is becoming more common, the result is rarely equal between all offspring in the true financial sense.

The survey showed that 70 per cent of Australian growers want to incorporate the next generation into their business through the transfer of assets or shared ownership. Only 19 per cent had decided the best outcome is to sell the farm and leave the industry.

Rabobank head of succession planning Rosemary Bartle says there is now more willingness among farm families to talk about the future and a greater preparedness for family members to voice issues and concerns than in the past. “Farming businesses with a well-developed plan and family members pulling in the same direction have the greatest opportunity to increase profitability and grow wealth, enabling the farm to provide for future generations,” Ms Bartle says.

“In that process, families may need to consider farm expansion, providing opportunities for additional family members to become involved in the business, ensuring parents are in a position to retire if they wish, as well as providing for those children not directly involved in the farming business by arriving at a decision on what is fair.”

Ms Bartle says in the 550 farm businesses that Rabobank has helped with succession planning over the past 17 years, only five per cent had achieved equal inheritance for all children.

Usually the child working on and eventually taking over the farm had benefited from greater financial help in order to preserve the family farm and home.

Ms Bartle says families have usually needed to come to an agreement around what is a ‘fair’ inheritance for all children, reinforcing Mr Stephen’s view that fair rarely means equal if the family’s desire is to retain the farm as an intact, viable business.

Mr Stephens believes a solution can be fair, even if it is very unequal, saying it is about what will work.

Fiona Best, the chief executive of the Birchip Cropping Group, says despite all the proactive work around succession planning by organisations such as hers, GRDC and consultants such as Mr Stephens, all too often farm handovers to the next generation are not handled well.

“It is not always viable to split a farm up, or sell it off. That’s why you need discussions early and involving everyone in the family,” Ms Best says.

“Everyone has to be allowed to put their expectations and ideas on the table, and then for these meetings to be held regularly and openly on a yearly basis, because it’s okay and natural for expectations to change over time as circumstances change, people get married and have children and family dynamics shift, and individual attitudes towards the farm and the farm business alter.”

She says the biggest change over the past two decades has been gender bias and unconscious discrimination against farm daughters starting to disappear, along with the assumption that it is only the son who is capable of running the farm.

She points to the recent research of Katrina Sasse, 30, a grain grower from Morawa in WA’s northern wheatbelt running an 8200ha cropping farm, who has just completed a GRDC-supported Nuffield Scholarship looking at how to encourage, empower and allow more daughters and women to become growers.

Ms Sasse says that in 2020 it is common sense to give equal opportunity for women to farm, otherwise the agricultural sector is 50 per cent the poorer.

“Confidence is instilled from a young age from parents and, compared with sons, farm daughters have not typically been granted the confidence, had the same access to experiential learning activities as sons, or been given the upbringing and socialisation to become successors,” she wrote in her Nuffield report.