"Significantly cheaper market" for both Sheep and Lambs at Bendigo 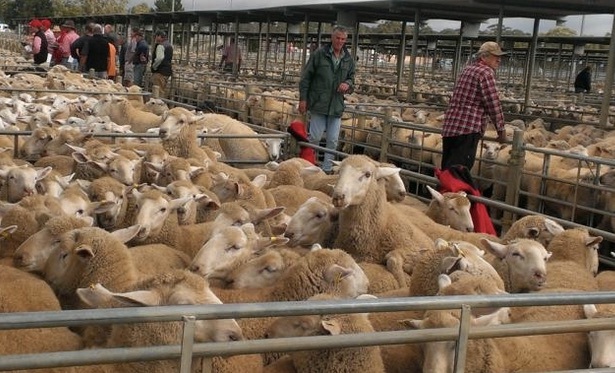 Yarding - 10,600 (-1200).
Lambs - 8,300 (-700).
Sheep - 2300 (-500).
Another slight reduction in both lamb and sheep supplies this week. Quality was plainer, with more winter clean-up lots evident and less weight overall. But demand was the main issue in another significantly cheaper market, with two key export companies still not operating and all other buyers quieter than usual. The heaviest export lambs were up to $30 cheaper, and it took a very well finished lamb over 28kg cwt to sell above $200/head. The better finished trade lambs were $10 to $15/head easier, while secondary lambs of all descriptions received heavy discounting. The sheep sale followed a similar weaker trend.
Extra heavy export lambs sold to $228/head. One agency led their run with new season lambs, receiving $215/head for a line of Dohne Dorset-cross that were estimated at 22 to 24kg cwt. Sales over $200 were limited, with the bulk of the yarding selling under this price point.
The main run of heavy crossbred lambs, 26 to 30kg, made from $185 to $206/head at an estimated 705c/kg cwt average. The 24 to 26kglambs, made from $175 to $191/head at around 730c/kg cwt. The neater medium and lighter domestic lambs, in fresh condition, from $150to $180/head to track from 750c to 780c/kg cwt. There was, however, plenty of plainer presented and mixed lambs that sold below 700c/kg cwt in all categories. Smaller lambs suiting MK processing orders made from $88 to $130 as dollar per head prices cascaded down.
Demand for mutton was at reduced levels, with not all buyers operating. Extra large crossbred ewes sold to $210, but bidding was erratic andthere was sales down to $144/head. A run of extra heavy shorn Merino wethers sold to $195/head. Most sheep varied from $130 to$170/head. The exception to the cheaper trend was rams due to a restocking order that clashed with processors.