Russian wheat crop in for a scare this week… 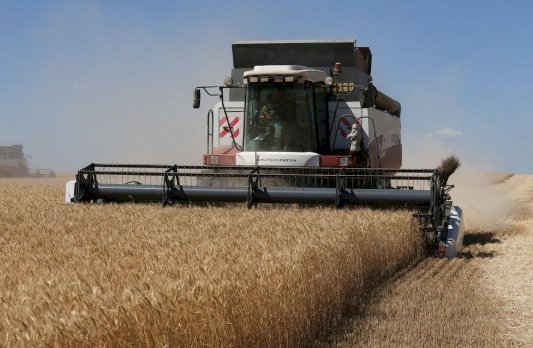 The Russian word “sukhovey” caught the attention of global grain markets last week, with the possibility of it striking Black Sea crops in the coming weeks popping up in numerous market and weather wires. The word itself means dry or drought, but its usage these days has a far more specific meaning, implying a certain set of associated phenomena.

Sukhovey refers to a wind with high temperatures and low relative humidity that has its origins in the steppes, semi-desert and desert regions of Kazakhstan. It emanates from the periphery of anticyclones, predominantly over the summer months and generally blows in a westerly direction.

The speed of the winds is usually quite moderate at less than 20 kilometres per hour (kph). However, in extreme cases, the wind speed can be more than 50kph and, on rare occasions, as high as 80kph. When associated with air temperatures above 25 degrees Celsius and relative humidity less than 30 per cent, this unique weather phenomenon can cause rapid evaporation of soil moisture, and crops in its path can wilt quite quickly.

Several weather models are forecasting a sukhovey to strike western Kazakhstan, large parts of southern Russia and north into the Volga River Basin this week. While it will add to the spring crop woes, most of the winter cropping regions have plenty of moisture and could cope with some drying weather. Nevertheless, some models suggest it may persist into the first week of July, which could definitely stress crops and reduce yields in some districts.

The area sown to spring wheat reached 12.8 million hectares this year, according to leading Russian agriculture consultancy SovEcon. This was due to an increase in the total cropping area as more land is bought back into the production cycle and a higher than average replant of winter cropping areas due to winter kill in the Central regions. The spring wheat issues are likely to be the limiting factor for Russian production this harvest.

Despite the spring wheat issues, Russian production forecasts have been on the rise this month. SovEcon raised its Russian wheat production forecast on June 11 by 1.5 million metric tonne (MMT) to 82.4MMT. Two days earlier, another local agriculture consultancy, IKAR, raised its wheat crop forecast by 2MMT to 82MMT.

Above-average rainfall in May and early June has significantly improved the winter crop outlook, particularly in the south, which is Russia’s largest wheat producing and exporting region. For the moment, it seems that bumper crop conditions in the south are more than compensating for any production losses in the spring wheat regions. Consequently, Russian wheat export estimates remain steady at around 37.5MMT in 2021/22.

Farmers across most of Ukraine have had an ideal growing season, and production forecasts are quite upbeat. Nikolay Gorbachov, the president of the Ukrainian Grain Association, is forecasting a bumper crop in 2021-22 with a record wheat crop of more than 30MMT on the cards if conditions remain favourable. The association is currently forecasting wheat exports of 21MMT in the 2021/22 marketing year.

At the other end of the forecast spectrum is Ukraine analyst APK-Inform who trimmed its wheat harvest forecast slightly last week to 27.3MMT but kept its export outlook unchanged at 19.8MMT.

Ukraine’s wheat crop is typically as high as 80 per cent milling quality and is highly sought in the export market. However, the proportion may be lower this year as there is a distinct risk that farmers may not achieve the 12.5 or 13 per cent protein level due to the higher than average spring rainfall and lack of sunshine to finish the crop quickly.

Logistical issues have historically hampered Ukraine's ability to quickly move grain into the export pathway, but according to Gorbachov, that issue has been addressed. Ukraine has invested heavily in rail logistics, with 28,000 grain wagons in their fleet compared to 10,000 just three years ago.

It is estimated that 65 per cent of grain destined for export can move to the port by rail, reducing the road task to 25 per cent, with the balance by barge. There are also moves afoot to increase the proportion moving to port on the country’s river system. New legislation, due to come into effect at the beginning of 2022, will make it a much more economical mode of grain transport. This will further reduce the reliance on road freight.

In Kazakhstan, hot weather and insufficient soil moisture reserves are stressing the developing spring wheat crop, putting downward pressure on production estimates. Some forecasters still have the country's wheat crop at more than 14MMT, but most are now under that mark, with yields expected to be less than last season as the adverse weather conditions take their toll. Analysts have wheat exports pencilled in for around 7.5MMT at this stage.

With harvest almost upon us, we are getting to the pointy end of the production cycle in the Black Sea region. If current production estimates are maintained through the harvest period, exports from Russia, Ukraine and Kazakhstan combined are expected to rise by around 5 per cent year-on-year to 66MMT. This is primarily due to the sizeable rebound in Ukraine production.

The tax regime will continue to cloud the grain export landscape out of Russia this season. But with a large exportable surplus in Ukraine providing liquid competition into similar destinations, Russian exporters will be eager to buy their share of the global demand pie. With the potential for another big crop down under, the key unknown is how aggressive they will be into Australia’s traditional Asian markets in the 2020/21 marketing year.