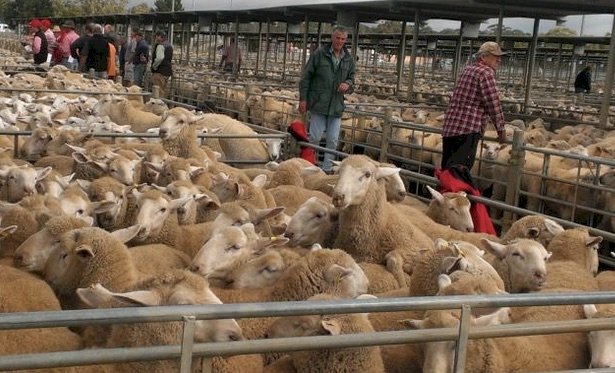 An increased lamb offering ahead of the Easter holiday period which cancels next Monday's sale. The yarding was dominated by a mixed quality line-up of heavy lambs, the majority over 26kg cwt and a lot above 30kg cwt. Competition from the buying ranks was dull, with not all processors attending or operating fully. Price results fluctuated, the most obvious trend being cheaper results over heavy lambs. Trade lambs sold a few dollars either side of firm, supported by very few pens of high quality stock below 24kg cwt being available. Store lambs were dearer, boosted by competition out of the north with an agency from Wagga Wagga in NSW a volume buyer.

The sale achieved a top price of $278/head for a pen of supersized crossbred lambs estimated at 40kg cwt. The next best price was $268, and the bulk of the 30kg plus lambs sold from $230 to $260/head to average 750c/kg on a lot of weight. Bidding was selective over the 26 to30kg cwt lambs which mostly made from $200 to $230/head at an estimated 760c/kg cwt. Domestic lambs sold from $165 to $195/head, the majority working out between 750c to 800c/kg cwt, with just odd sales higher for neat types in short skins. Store lambs with frame and the potential to be finished for the winter trade were well supported at $145 to $178 to average $166/head back to the paddock.

Just 4,000 sheep yarded, made up of a lot of smaller and mixed pens rather than big lines. Competition heated up, particularly in the later part of the auction which pushed some Merino and crossbred sheep above 700c/kg cwt. A northern processor continued to dominate on heavy mutton. Very large meat ewes to $272 and heavy Merino wethers in a big skin to $260/head.