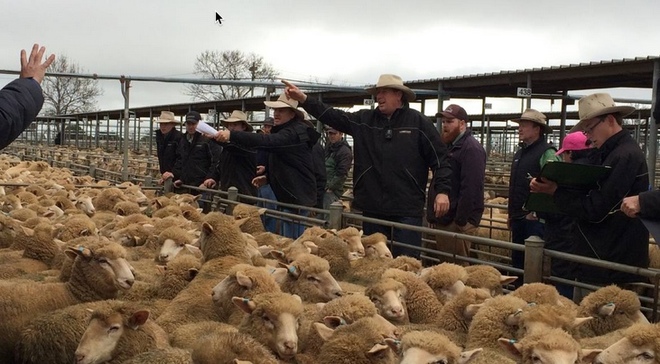 Yarding - 25,000 (+1000).
Lambs - 17,500 (+800)
Sheep - 7500 (-300).
Similar supply of lambs, however, there was less weight and finish in a plainer yarding compared to a week ago. Export buyers competed harder on the smaller pool of heavy lambs that weighed above 26kg cwt, creating a dearer trend of $5 to $16/head across both woolly and shorn pens. Price results for the general run of trade, light and store lambs were within a couple of dollars of last Monday. Shorn lambs displayed the most weight at this sale and claimed the top three prices of the auction, peaking at $249/head.
Extra heavy shorn lambs sold from $231 to $249/head in a limited but quality run. The strongest processor competition for woolly young lambs was in the 26kg to 30kg cwt category, with sales from $215 to $237/head. These lambs improved to post averages from 760c to790c/kg cwt. The freshest presented heavy trade lambs made from $180 to $205/head. After this the general run of woolly crossbred lambs to domestic processors sold from $158 to $178, with an overall average of 770c/kg cwt. The better framed store lambs to the paddock were selling from $140 to $158; smaller young lambs to restockers made from $110 to $135/head.
Only a slight change to sheep numbers at 7,500 head. Bidding opened strongly before competition became erratic late in selling with not all processors following the market. Light and plain sheep were the most affected as support dwindled to a couple of buyers who pitched various offers at auctioneers. Some light sheep recorded falls of up to $30/head. Heavier sheep generally held their value thanks to the on going support of a major northern exporter, but the market was still erratic at times.