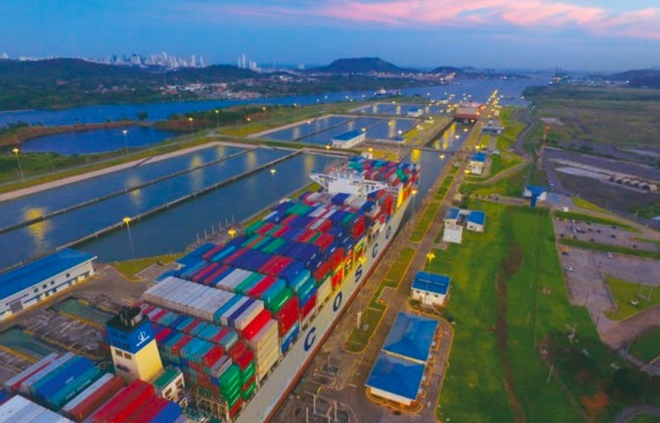 The Panama Canal is considered one of the most difficult engineers projects ever undertaken and makes the list of the seven modern wonders of the world. It cuts across the narrow Isthmus of Panama via a series of locks which lift the transiting vessels a total of 26 metres to Lake Gatun and then lower the ships back to sea level at the other end.

It was originally opened in 1914 to reduce the sailing time between the Atlantic and Pacific Oceans by avoiding the treacherous and lengthy voyage around the southern tip of America. Traffic has increased from around one thousand transits in the first year of operation to almost fourteen thousand in recent years.

Then in 2016 the Panama Canal Authority (Autoridad del Canal de Panamá or ACP) christened a larger set of locks capable of handling the much bigger Neopanamax class vessels. The new locks were opened just months before the trade war erupted between China and the United States, the canal’s two largest transit sources.

Since the larger locks opened the three biggest users in terms of transits, have been container ships, liquified petroleum gas (LPG) carriers and liquified natural gas (LNG) carriers. There has been relatively little focus on dry bulk cargoes, even though that category remains the canal’s highest-volume cargo type.

A Panamax dry-bulk vessel, normally used for grain, would typically carry a deadweight tonnage (DWT) of 65,000–80,000 metric tonnes but its maximum cargo is reduced to around 52,000 metric tonnes due to draft limitations in the canal. Panamax container ships can carry about 5,000 containers, or twenty-foot equivalent units (TEU).

However, the Neopanamax dry-bulk ships, generally used for coal and other minerals, can lug a DWT of 120,000 metric tonnes through the canal and the container ships can load 13,000 TEU. That translates into a substantial increase in the canal’s cargo capacity by volume.

In the ACP’s 2018 fiscal year, ending September 2018, dry bulk cargoes – mainly grains and coal – accounted for 47 per cent of volume through the original Panamax locks and 14 per cent through the newer Neopanamax locks. Collectively, this totalled 36 per cent of cargo volume through both locks, by far the biggest category and well ahead of container shipping with a 22 per cent share of total cargo volume.

Fast forward two years and the trade war challenge has been replaced by COVID-19. May and June saw the peak of the pandemic’s impact on the waterway with transits down 20 per cent. This was mainly due to reductions in passenger ships, vehicle carriers and LNG tankers.

Global trade began to recover thereafter, and by August and September transits and cargo volumes had normalised. And now, transit demand for the three key Neopanamax segments, container ships, LNG tankers and LPG tankers is surging simultaneously. This has led to significant delays through the new lock system as the COVID-19 pandemic has reduced resourcing capacity and necessitated additional staff safety procedures.

The delays are primarily affecting ships without reserved transit slots which means the container trade is relatively unaffected as they have fixed routes and timetables and can book up to three weeks in advance.

Vessels that arrive at the waterway without a booked transit slot are waiting up to 5 days to gain passage. The primary offenders are LNG tankers making their way from the US, the world's fastest-growing LNG supplier, to Asia. This has contributed to a recent rally in the cost of chartering LNG tankers in the spot market. The delays are also prompting some ship owners to take the longer route around the Cape of Good Hope, compounding the spot price pressure.

Changing global trade flows, particularly to and from China, has seen a significant change in the direction of canal trade in recent years. In the 2007 fiscal year, 53 per cent of total volume was from the Atlantic Ocean to the Pacific Ocean. By fiscal year 2020 that flow had increased to 65 per cent.

The principal reason is that dry bulk and liquid bulk make up a much higher proportion of total cargo than containerised volumes. The bulk volumes are fuelled by three key categories: soybean, corn, sorghum and wheat shipments from the US Gulf into Asia; refined petroleum products also out of the US Gulf en route to the US West Coast, Mexico and the Pacific coast of South America; and since 2016 LNG and LPG shipments from the US to Asia.

From a grain perspective, the direction of the trade flow is even more biased. The southbound (Atlantic to Pacific) flow of grains in the twelve months to the end of September totalled 27.5 million metric tonne (MMT) or 16 per cent of total canal volume. The northbound (Pacific to Atlantic) flow was just 3.5MMT, or 4 per cent of the 2020 volume.

And it is not only grain of US origin that is making the southbound journey in recent years. The ACP has signed several tariff agreements with Brazilian exporters to utilise the Panama Canal for panamax size shipments of soybeans and corn from the north of Brazil into Asia, given the similarity in draft with ports on the Amazon River.

Container cargos accounted for 22 per cent of total canal volume in the last fiscal year, the same as in 2018, but down from 29 per cent in 2008. The total container tonnage in 2020 was 57MMT, 7 per cent lower than the 61.15MMT carried through the waterway in 2008. Interestingly, the TEU capacity of transiting vessels rose by 36 per cent over the same period, suggesting that there was a much higher proportion of empty containers on each vessel in 2020.

According to the ACP, grains are now the third-largest commodity category by volume that transits the inter-oceanic route, after oil and its derivatives, and containerised cargo. Mind you, there would be plenty of grain in container statistics. The downward trend in grain volumes through the Panamax locks over the last few years has reversed dramatically with the China-US trade war truce in 2020.

El canal de Panamá is perhaps the most crucial piece of infrastructure supporting the free flow of international trade in the western hemisphere. In fact, the waterway is crucial to just about every economy in the world as we all rely on the import and export of goods and services to sustain life, GDP and economic growth.