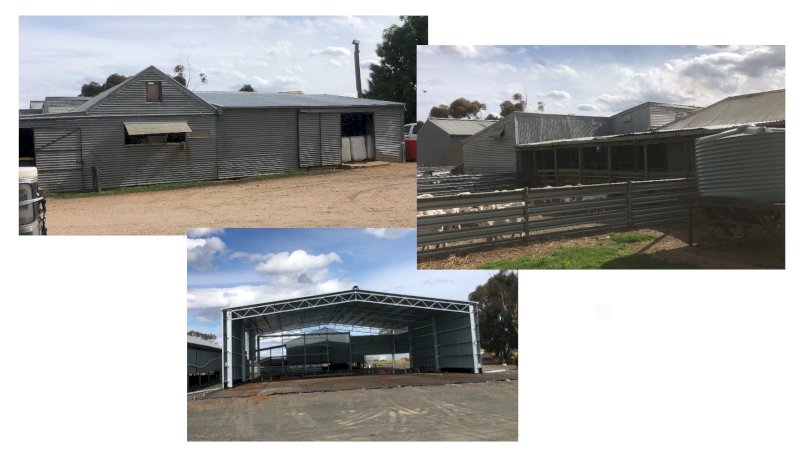 We have an old Woolshed on the family Farm at Marnoo in Victoria's Wimmera region. In some spots, the Woolshed is over 125 years old, and it was initially the old stable complex. It has since been added to many a time and has this sort of complicated look and feel about it.

Nothing really flows (Sheep, Wool, people). When something is built with a base and then added too, and added too, it never really works. This Woolshed is testimony to that.

Woolsheds are such nostalgic places, and each structure has its very own peculiarities.

This Shed, however, is a little bit more unique than most.

So what's wrong with it? Well, everything and nothing.

The battens are so low to the ground that you have to clean it out by lifting each batten and digging it out with a shovel and wheelbarrow. It had to be done regularly, and messing with battens on old stumps is fraught with danger. They don't always go back the way they came out.

Because it's so low to the ground, no air can circulate, and it gets mighty hot in Summer. Fans rule.

We shared a Woolpress with the neighbour, and getting it in and out was a logistical nightmare. The sort of stuff Worksafe would throw the book at...

The Shearers were too close and often would be in each other's pocket, Shearing away.

Loading Sheep into the catching pen was always difficult, sometimes it was one by one, and tested the most patient "penner upperer".

A "could-have-been" moment happened about 20 years ago when a light switch caught on fire, and the old man put it out. "Should have let it burn", he was told, time and time again...

A funny incident was when a brown snake crossed the board from the counting out pen, to the catching pen whilst Shearer "Kevie" was on the long blow. It all happened quickly, but it rattled old Kevie, so much so that he then entered local politics.

I remember crutching all those daggy Sheep, toenailing hundreds of sale Rams and cutting off horns with the angle grinder each year. All done in that Shed.

And the "cutouts" with the long necks.

But now, after 120 odd years of good service, the old girl is about to be decommissioned. Retired, is a better word.

A new Woolshed with a 2-metre clearance from the ground to the floor (a legacy of pulling up battens) is about to replace her.

In the end, I think the Shearers struggled, the Sheep are magnificent to Shear (plain bodies Merinos), but the facilities were not that enticing. You could say the comfort factor was pretty low.

There were many stories and memories to come from that Shed, many shearers remember Shearing there, but it's time to move on and let a new chapter begin.