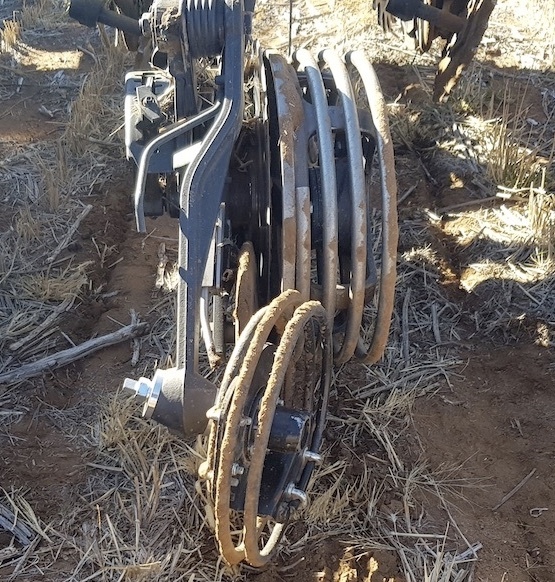 Paul Ryan and his team at Ryan Farming Machinery of Horsham has developed some of the most innovative planting systems for the farmer.
His unique patented concepts are all about making the farmer more productive. Following on from the Ryan Tyne that changed face of direct drill by allowing the farmer to easily convert their conventional back in the early 90’s. Now is the leading no-till retrofit tyne.
Paul has developed the Ryan Tyne to handle a massive breakout of 600lb. The new beefed up tyne has the ability to quick change from a shank to a double disc assembly. Paul’s first experienced planting with a single disc on his family when his father Austin Ryan OAM developed a single disc planter. Paul found that a retrofit double disc system to be more universal and practical. A farmer can now plant dry without making clods and with the unique front boot system allows the farmer to plant in unchoice conditions without blocking.
Paul has continued on with the Ryan Coil Wheel system by adding onto the original Press Harrow gang model to individual rear and tyne mount models.’ The self-cleaning and non-caking benefits from the Coil Wheel has proven to be an advantage from red clay soils in the south to the black soils of the north’ Paul said.
Continuing the family tradition Paul developed the Coil Wheel system into a patented Gauge and Closing Wheel for single and double disc planters. After working close with farmers who were having trouble with furrow cracking and build up on the conventional rubber gauge and closing wheels Paul put his development skills to action and came up with what would have to most innovative gauge and closing system since disc planters have been introduced to the market.