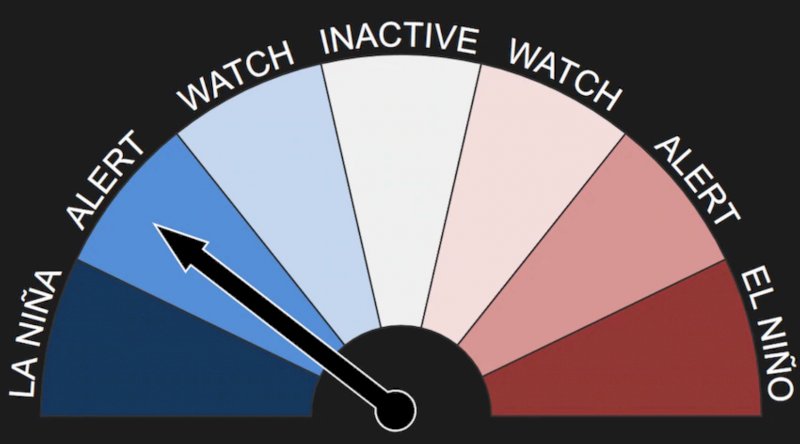 The increased likelihood of consecutive La Niná weather patterns has raised concerns for global winter crop production over the next twelve months, increasing the prospects of continued market volatility as consumers scramble to cover open positions in a falling supply environment.

According to the Australian Bureau of Meteorology’s latest climate update, the El Niño–Southern Oscillation (ENSO) outlook remains at La Niná “alert”, meaning the chance of a La Niná event forming in the next few months is around 70 per cent. Recent cooling in the tropical Pacific Ocean has temperatures approaching La Niña thresholds, and most models suggest further cooling is highly likely.

Winter crop planting conditions are marginal in some major northern hemisphere producers. Persistent dryness in many parts of Russia, particularly the Volga region, is hampering the winter crop planting campaign, and there is concern over crop emergence. This area was seriously impacted by hot and dry weather this year, leading to below-average production, and a repeat would be a severe blow to global wheat and barley stocks.

Ukraine market analyst UkrAgroConsult reported last week that Ukraine's fields are 'badly short of soil moisture, which could adversely impact crop establishment ahead of winter, crop survival over winter and productivity in 2022. Much of the country has reportedly received less than 25 per cent of average rainfall in the past month.

The issue in China is too much soil moisture. Persistent rains through September and early October have saturated fields. At 26 per cent completed by October 19, the planting program is well behind the long-term average of 53 per cent by mid-October. There are concerns that late sowing will adversely affect plant growth, and the excessive moisture will increase the development of plant diseases ahead of winter.

Planting of the Canadian winter crop has commenced, but the drought persists. The dryness across the Prairies is raising concern about a repeat of this year's harvest, which will see Canadian wheat exports in the current marketing year fall by as much as 12 million metric tonne compared to 2020/21.

A three-month forecast for the United States predicts more drought in some of the country’s key wheat regions, particularly the Southern Plains. The hard red winter crop performed well this year compared to the spring wheat regions further north, but crop establishment is at risk in key states such as Kansas. The planted crop desperately needs rainfall to boost growth before snow blankets the fields and the plants succumb to winter dormancy.

The first US 2022/23 winter wheat crop condition report was released last week, and it pitched the good to excellent condition score at 46 per cent. While this was up from 41 per cent at the same time last year, it was well below the long-term average of 54 per cent. La Niña has a solid record for restricting precipitation in the Plains and western Corn Belt during the autumn, winter and early spring seasons, adding a tad more fuel to a market already on fire. It is far too early to be worried about next year’s production, but when supplies are tight, the market jumps at shadows.

Meanwhile, global consumers are gorging on European wheat at the fastest rate ever as poor harvests and export taxes tighten supplies in many of its export competitors. The French-based consultant Agritel is expecting European wheat exports to top 11MMT in the first four months of the 2021/22 marketing year, 25 per cent ahead of the previous season’s export pace and the most for that period since records began two decades ago.

Russia’s floating export tax commenced on June 2 this year at a rate of US$28.10 per metric tonne, and it has risen steadily ever since. The Russian Agriculture Ministry announced last week that it would increase from US$67 per metric tonne to a new record of US$69.90 per metric tonne from November 10.

This has allowed Romania to dominate Egyptian wheat tenders so far this season at the expense of their Black Sea competitor. Egyptian tender prices are the highest in the last five years, yet their 2021/22 purchases are running 26 per cent below the same time last year. Failure of the North American spring wheat crop has protein wheat consumers buying from northern Europe and China has a passion for French wheat at the moment. Accordingly, the European Union looks set to overtake Russia as the world’s biggest wheat exporter in 2021/22.

All this is music to the ears of southern hemisphere farmers hoping to take full advantage of lower world production and the high price environment. As northern hemisphere supplies tighten, Australia and Argentina will be there to scoop up the demand.

Production in Argentina appears to have stabilised after a few scares through the late winter and spring. The Buenos Aires Grain Exchange lifted its wheat production estimate by three per cent last week to 19.8MMT after good rains eased moisture stress in several key production provinces.

Wheat production estimates in Australia are challenging or even exceeding last season’s record output, and the world is watching. So too canola production, which is set to smash last year’s record harvest of 4.28MMT and potentially exceed 5MMT for the first time.

This is a potential bonanza for producers down under who, prior to last harvest, had endured a run of poor seasons and low prices. However, the crop is still in the paddock in most districts, and the proverbial can still hit the fan. Ironically, La Niná is of greatest concern, with forecasts for a wetter than average finish to 2021, particularly for eastern Australia. If harvest yields and quality fail to meet market expectations, the fire will get even hotter.