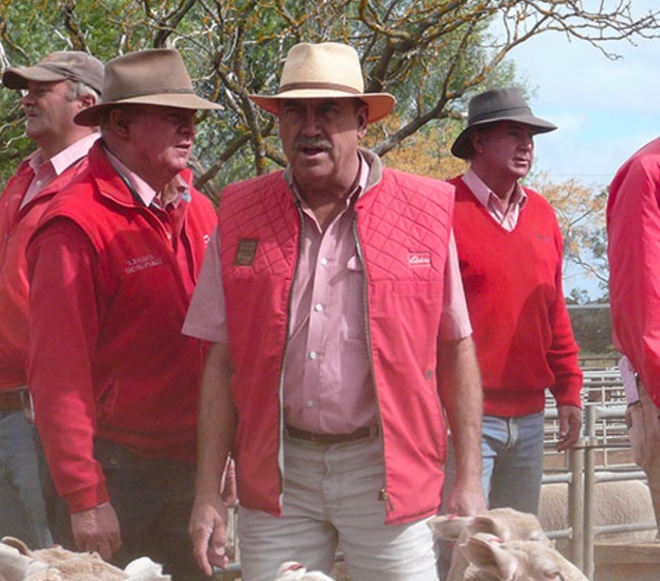 Wycheproof auctioneer Kevin Thompson has just chalked up 50 years with Elders but it still feels like grand final day every time he stands at the rail.

“It’s like the final part of the game,” Mr Thompson said.

“When you purchase the livestock for a client who appreciates your judgement and knowledge, watch as the clients grow and shear them, discuss the breeding program and then you’re the auctioneer selling those sheep, it caps off the whole program.”

And just how high the stakes can be has always been top of mind for Mr Thompson.

“Buying a B-double load of livestock, in some cases, is more than what you’d pay for a house on the beach,” he said.

“The responsibility and the thinking behind what you’re actually doing with someone else’s money is very, very important.”

Mr Thompson said it was essential to consider how any purchase fitted into a client’s business strategy. Almost any transaction had been profitable while prices had continued to rise over the last two to three years, he said, but that wouldn’t always be the case.

“It’s been very positive but I think if that changes marginally, the deep thinkers and the discerning agents will come to the surface really quickly,” he said.

“Elders has some good training in place, which probably makes them the preferred agent in most of those situations.

“Getting the positive result is very satisfying but working through a negative situation for a client is also something I take very seriously.”

In fact, it’s been a very serious business for Mr Thompson right from the beginning of his career with Elders, which started in 1970.

“I didn’t originally see myself as an auctioneer but a couple of mentors told me I had the right voice for it, probably from drinking heavy beer and smoking Marlboro cigarettes, which I don’t do anymore,” he said.

“I thought about it and then became a bit of a student of auctioneers long before I had a go. I wanted to do it right.”

When he did start auctioneering in 1978, a young Malcolm Hunt had just joined Elders. Now Victorian state manager, Mr Hunt said that, by then, Kevin Thompson “already had something of an aura about him”.

“When it was announced the other day that he’d reached 50 years with Elders, I was struck by all the messages of congratulations that came through from people he’s trained or touched in some way,” Mr Hunt said.

“Kevin is the quintessential stock agent of western Victoria, the genuine good guy who is highly respected by all our staff.

“He has an intricate knowledge of sheep, understands what he’s selling and has a magnetism about the way he conducts himself.”

Asked what makes a good auctioneer, Mr Thompson said it was a mixture of confidence, knowledge of what’s being sold, and being able to read the crowd.

None of that had changed in 50 years but he said electronic trading platforms like AuctionsPlus, together with bigger and more efficient trucks, opened up livestock trading opportunities across Australia, even as saleyards consolidated. There was more data, too.

“I know there are probably people in the industry that may disagree with me but I think you’ve got to have a good eye for livestock and a visual appraisal is still extremely important no matter what you’re buying,” he said.