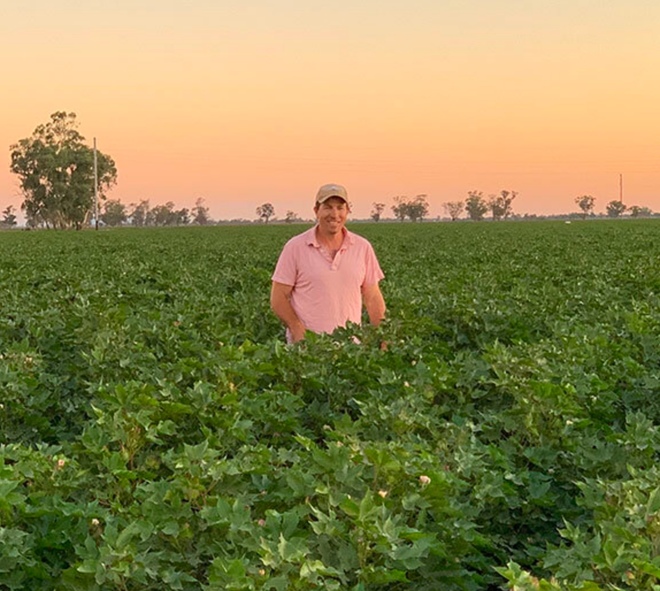 On a property near Forbes, in central west New South Wales, Matt Shephard is living his dream of being a cotton grower and grain producer.

His journey towards actively becoming a farmer and cotton grower stems back almost 10 years, when he and his friend David Black began making preparations in earnest.

The duo’s plan was to lease land from Andrew and Sarah Black, David’s parents.

“In planning our crops, and in the absence of a livestock operation, we had done a risk assessment on the business and determined we needed an income not reliant on crops exposed to things like frost.

“We assessed that we could generate high profitability when water was available, but we needed to grow a high value crop when water availability was low.

“We needed another crop that was going to give us a higher return per megalitre of water than maize, lucerne, or lambs, to justify investing in earthworks and infrastructure to be water efficient and generate sustainable profits.”

The prospect of growing cotton continued to percolate.

But in 2013, Matt and David’s plans came to a halt. In the summer of that year, David was tragically killed in a plane crash.

“David owned an aerial spraying business and he was down the south coast waterbombing bushfires when the accident happened,” Matt said.

“It was an incredibly sad situation; Dave was very capable and he had an infectious love of life. After a while of reflection, I decided to carry on with the farm plans.”

Matt is a director of ag consulting firm IMAG Consulting and works as an agronomist; but on staff at the farm he has a manager and a couple of casual staff who look after ground preparation and irrigation.

“Having good staff is the key to making cotton production successful on any farm,” Matt said.

“I have well educated and enthusiastic staff, which I’m so grateful for.”

Matt said planning to grow cotton was a long and complex process.

“I’d worked with cotton growers in the Macquarie benchmarking and business planning, and cotton was always a key crop in their mix because of the return on investment it provided the business,” Matt said.

“The length of the growing season was a concern at Forbes for us, but we also had one eye on what the climate change indicators were telling us about the way forward, so we started considering cotton as a viable crop.

“We kept an eye on the global cotton price, and we set a price trigger point where we’d switch to cotton, but we had country prepared for either maize or cotton.

“I discussed my plans with a couple of other local farmers who said, ‘We’ll give it a try if you give it a try’, so, together we decided we’d have a go.”

Operating with best practice a priority

Matt said in 2015, three growers, including himself, in the Upper Lachlan Valley decided to grow about 250 hectares of cotton – enough to entice a picking contractor. They also pulled together to hire contractors for the jobs they didn’t have specialised equipment for.

“In our first year, we had phenomenal yields – about 14.9 bales per hectare,” Matt said.

Matt’s operation now grows up to 180 hectares of cotton each year on bore and Lachlan River water, in addition to other crops like canola, wheat and chickpeas.

Now that his operation has established cotton as a core component of their mix, Matt said operating with best practice was important to them.

“We use the cotton industry’s myBMP program as a guide; the beauty of it is you can pick off parts of the guide that best suit where you’re up to,” Matt said.

“Every year we try to pick off one or two areas of BMP, and as the business grows and develops, we’ll be able to pick off more and more of the modules.

“If you apply best practice agronomy in cotton production, then none of the resources are wasted and you don’t end up with environmental problems such as low nitrogen use efficiency and wastage of water.”

“I’m also really optimistic about how the industry can lead the way in agricultural investment.

“I’d love to see us continue to pioneer technology that has large benefits to the wider agricultural community - whether its satellite imagery and using spatial data to improve productivity, or improving irrigation designs and improving water use efficiency. A lot of those strategies can be used across a lot of different crops, and that’s where wider ag will benefit.”