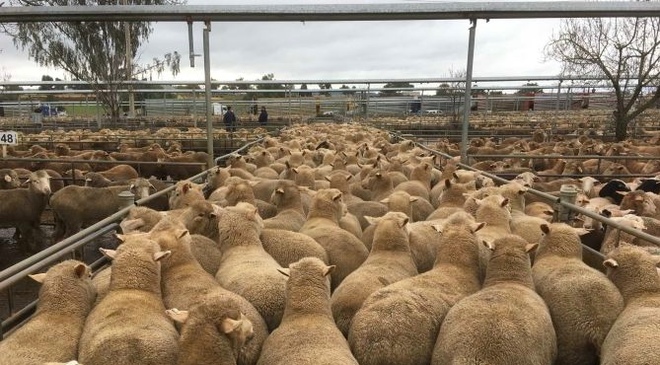 Yarding - 31,900 (-6100).
Lambs - 22,400 (+10,400).
Sheep - 16,500 (-16,500).
Lamb supplies declined with harvest taking priority for many producers. The quality of the new season trade lambs continues to be very good however, there were some pens showing seed infestation. Heavy lamb supplies declined and agents did not have the numbers of lambs weighing over 30kg carcase weight. There were plenty of restocking orders in play which meant processors struggled to match prices given. A full field of buyers were in attendance however not all exporters operated.
In the trade market not all major domestic processors operated and buyers were very selective trying to avoid dry and longer wool lambs. Prices eased over all categories. New season lambs weighing 22 to 24kg reached $194/head to average 770c/kg cwt. Merino trade lambs were limited with the bulk of these making from $145 to 182/head. There was a very mixed selection of lambs to suit restockers. The general run of lambs carrying some weight and frame sold from $148 to $180/head. A smaller field of export buyers were at the rail and not all companies operated to capacity. Lambs 24 to 26kg carcase weight sold from $190 to $212 easing by $5/head. Lambs weighing 26 to 30kgslipped $4 to make from $205 to $250/head or an average of 790c/kg cwt.
It was a very good yarding of sheep and not all buyers operated. Heavy ewes sold to strong northern demand to average 643c/kg. Heavy Merino wethers lifted $20 to sell from $220 to $240/head. Trade sheep averaged 639c/kg cwt.