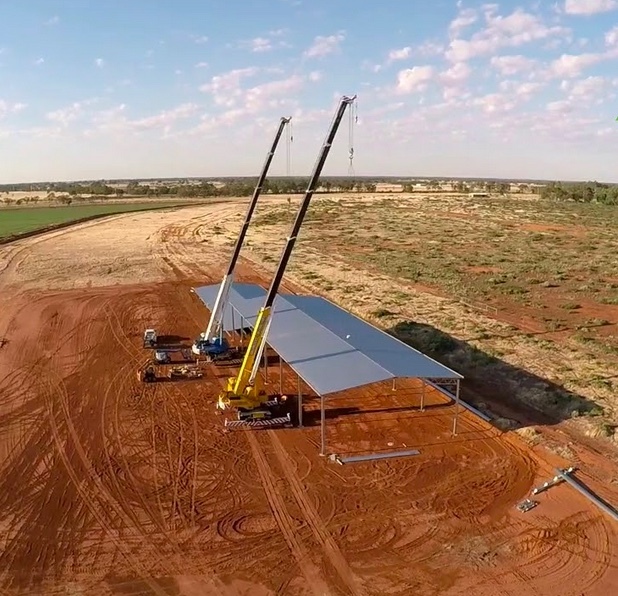 Growers in the southern Mallee and Wimmera regions are leading the charge, all wanting to invest in infrastructure to protect the quality of their hay.

Sales of hay sheds are on track to double this season for Entegra, one of the Wimmera and Mallee’s largest shed construction businesses.

Since the beginning of this year, Entegra has sold 65 per cent of the total number of hay sheds it sold in 2019.

Hay shed construction is the fastest growing business category for Entegra, which manufactures all types of agricultural and industry sheds.

“A lot of farmers had so much hay at the end of harvest that it was stacked-up to 10 bales high in the paddocks,” Entegra General Manager Laurie McCalman said.

“This has been an incredible turnaround in a region which had gone through severe drought and then a flood during the 2018 harvest.

“This past season, record prices encouraged hay production and now it is flowing through to on-farm investment.”

“Hay’s an important part of our operation now and if you’re going to go to the expense of doing hay, you’ve got to store it well,” he said.

“The market price fluctuates and with our latest hay shed, we’ll be able to better maintain the (quality of our hay) and have more options.”

Pre-engineered structural hay sheds (kits) which can store from 1,000 to 2,500 have been the most popular locally, due to the large volumes of hay produced, according to Laurie McCalman.

“Farmers want their sheds installed faster and thanks to the introduction of the kits, this has been possible,” he said.

“Thanks to the hay shed kits, we were able to install a record number of sheds before they were needed for vital hay storage.”

Customised hay sheds have also been popular with growers.

Mr McCalman said some sheds, up to 7.5 metres high, were constructed because farmers have the machinery to stack bales at that level and it’s also cost effective.

“So, we’ve just introduced the 2800 bale hay shed for this season.”

“A well-constructed shed adds value to stored fodder and this provides a quality and consistent product for our customers,” he said