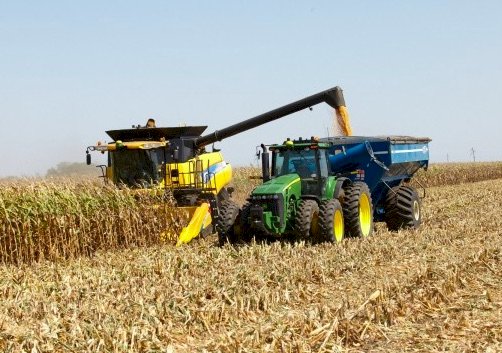 Brazil and Argentina's weather situation has been a tale of opposites in recent weeks, and agricultural output is suffering. Too much rain continues to delay both the soybean harvest and planting of the safrinha corn crop in Brazil. Simultaneously, production estimates have been cut as drought conditions plague row crop production in Argentina.

As of early last week, Brazilian farmers had harvested around 35 per cent of the planted soybean area, the slowest pace in a decade. This compares to 49 per cent at the same time last year and a five-year average of 53 per cent.

Unseasonably dry conditions at the start of planting in October and November means the crop is a little later than usual, but far more critically, bouts of heavy rain across many production regions in February and early March have prevented farmers from accessing fields to harvest the ripe crop.

The Northern Brazil state of Tocantins has been the hardest hit by the deluge. It rained almost every day in February, receiving around 615 millimetres, more than twice the states monthly average. There are also significant issues in northern Mato Grosso, parts of Goias, Piaui, Maranhao, Para, and Parana.

The quality of the output is a growing concern for farmers and exporters alike. Some farmers in Tocantins have reportedly abandoned their crops due to seeds sprouting and rotting in the pod. And grain buyers have refused to accept the worst soybeans because they have inadequate capacity to dry the high moisture product and limited ability to blend out the low-quality soybeans onto export shipments while still meeting contract standards.

However, it appears the flooded paddocks and rotten beans are more a regional issue than a nation-wide problem as crop estimates are holding up despite the stories of doom and gloom. Brazilian government forecaster Conab raised its soybean production forecast by 1.3 million metric tonnes (MMT) last week to a record 135.1MMT. The USDA also raised its Brazilian soybean production estimate by 1MMT to 134MMt in its March supply update.

By contrast, agribusiness consultancy Safras & Mercado have hinted their current estimate of 133.1MMT is likely to be reduced in the coming days due to poor yields. And Dr Michael Cordonnier’s estimate was unchanged last week at 132MMT, but he does have a forward bias of neutral to potentially lower on account of the wet weather issues.

The late harvest, in conjunction with logistics delays from farm to port, limited soybean exports in February. The vessel line-up at Brazilian ports got as high as 19MMT at one stage. This situation has turned around in March, with exports forecast to reach a record 15.5MMT for the month. However, terminal receivals are being stretched to the limit with long queues forcing trucks to wait up to two days to discharge the freshly reaped soybeans at the port.

The alarmingly slow pace of this year’s soybean harvest is a massive headache for the safrinha corn prospects, with planting delays the worst since the 2010/11 season. The crop represents around 80 per cent of the country’s total corn output, a significant proportion of which is exported. It is sown into the soybean stubble immediately after the harvest, with both operations quite often happening on the same day.

The ideal planting window has now passed in many regions, increasing the risk of yield penalties; the crop will be maturing and hitting its peak moisture requirement as the precipitation traditionally decreases. Once the crop is planted, growers will be praying for the current wet weather to continue into the dryer months of May and June.

According to Safras & Mercado, domestic corn consumption will hit a record 77.4MMT this season. Corn supplies are already tight, raising the possibility that the country will need to import from Paraguay and Argentina in the coming months to quell domestic prices and bridge the supply gap to the late safrinha crop harvest.

Like soybeans, Conab is not buying the lower corn yield story just yet. They increased their yield forecast from 5.52 metric tonne per hectare (MT/ha) in February to 5.54MT/ha last week. This pushed production to a record 108.1MMT compared to 105.5MMT last month, including a 2.7MMT jump in the safrinha crop production to 82.8MMT. Dr Michael Cordonnier is a little more conservative, leaving his output forecast at 105MMT with a neutral to lower forward bias.

In Argentina, the drought that started in mid-2020 and reduced this season’s winter crop harvest has continued into 2021. The country’s Pampas farm belt has been exceptionally dry, and recent heatwave conditions have exacerbated the situation. The early planted soy fields are approaching harvest, with yields expected to be well below average.

The strong La Niña climate cycle forced the Buenos Aires Grain Exchange (BAGE) to reduce its row crop production forecasts last week with a strong possibility of further downgrades if the dry continues. It sliced 2MMT off the soybean number to 44MMT and 1MMT off the corn estimate to 45MMT. Some improvement in soil moisture is forecast in the next two weeks, but the hot temperatures will also persist.

Recent crop ratings reflect the poor state of the crop. Early last week, the soybeans were rated at 10 per cent good-to-excellent compared to 15 per cent a week earlier and 44 per cent last year. On the flip side, 20 per cent of the crop was rated poor-to-very poor, with the balance of 70 per cent falling into the fair category. The soil moisture profile was 32 per cent short-to-very short and 68 per cent favourable-to-optimum, the latter down from 75% last year.

The corn picture is a little better but still well below average. The good-to-excellent category captured 25 per cent of the crop compared to 30 per cent a week earlier and 50 per cent last year, with 16 per cent rated poor-to-very poor and 59 per cent in fair condition. The soil moisture status across the corn area was also pegged at 32 per cent short-to-very short and 68 per cent favourable- to-optimum, but the latter is down from 81 per cent a year earlier.

Stabilisation of the production outlook in South America is critical. The funds hold sizeable long positions in both corn and beans, and they seem happy to maintain that stance as long as there is uncertainty over the size and quality of the South American crops, global demand remains elevated, and the US balance sheet is tight.

The flow of soybeans from Brazil to China is improving rapidly, and Argentina continues to offer corn into the export market, putting a cap on global values. Other than the weather, the next significant row crop signpost will be the US March Prospective Plantings report from the USDA, due for release at the end of the month.