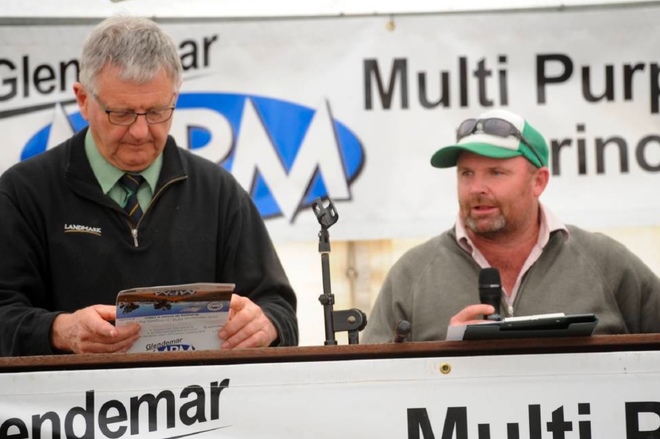 Glendemar sold under a new COVID safe system where the Rams were penned outside the selling area, and rather than having the Rams run through a parade ring; they were videoed and displayed on a big screen individually. The new system was received well and will become a selling solution of choice in the future.

Customers who have been using Glendemar genetics are reporting weaning rates well above the industry average and have been rewarded with high lamb prices and strong surplus Ewes sales.

Glendemar has a heavy focus on ASBV’s, and many of their clients are happy to pick Rams on the back of the figures and trust that the structure and Wools are up to scratch.

This was spelt out with 42 lots selling through Auctionsplus. New client and volume buyer Chris Escott, Kaniva, Vic had never seen the Rams before but was advised by a long term Glendemar client that the Rams would take him to where he needed to go from a breeding point of view. Chris bought 10 rams at $2100 average.

Another volume buyer and long term client Deane and Henry Goode, Kingston, SA who bought 12 Rams at an average of $3125.

Howard and Chris Frampton, Joel Joel, Vic who have been Glendemar clients since the 1970’s, once again took home large daft of 12 Rams at an average of $2250 average.

Russell Pitcher, Skipton, Vic has been using the Glendemar genetics more than 20 years and bought 6 Rams at an average of $5000. Another Western District client Stacey Partners bought 7 Rams at a $4500 average.