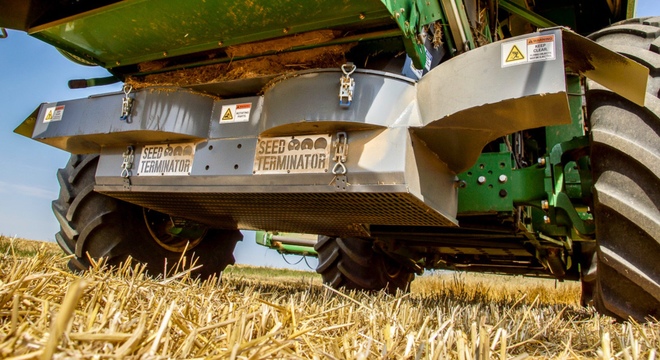 Its nearly crunch time for farmers thinking about buying machinery that needs to be installed before June 30 to take advantage of increased instant tax write-offs due to COVID-19.

Dr Nick Berry, inventor of the Seed Terminator, said orders for the weed seed management technology would need to be placed quickly to ensure installation could be completed before the end of the financial year.

“Farmers looking to add mechanical weed control into their operation to fight the ongoing battle against weeds and, more recently, herbicide resistance have the perfect opportunity to add a Seed Terminator to their farming system and make the most of every pass.

“This is Australian designed, tested and manufactured technology so every dollar spent is keeping Australian workers in jobs.”

The Seed Terminator is a multi-staged hammer mill that is driven off the harvester’s engine, pulverising 99% of weed seeds and distributing the processed material back on to the paddock as mulch.

After working closely with farmer research partners over some 281 harvests, the Seed Terminator technology is paddock proven and farmer focused.

Four seasons of continuous improvement have resulted in a durable mechanical drive system, a range of patented mill techs with 10-minute changeout time, reduced power draw, magnet tray and it can be fitted to five makes of harvester.

“Whatever returns to the weed seed bank will, in the following year, be selected by herbicides and we want to try and reduce that,” he said.

The Group’s testing of the Seed Terminator’s mill outputs has supplied rapid and concise results to the company, allowing for continuous development and improvement of this technology.

Lucindale grain grower Peter Williams said he made the decision to go down the path of investing in weed seed management technology when ryegrass and other weeds became even harder to manage after high winter rainfall.

“Due to our heavy stubble loads and long-season rainfall, weeds, especially ryegrass, have always been a problem but after two very wet winters it became even more difficult,” he said.

“It became obvious we had to do something other than solely rely on chemicals. Not being able to windrow burn and preferring not to go down the chaff cart path because of the heavy stubble loads, mechanical weed seed control seemed a good choice.”