Filling the void left by the demise of traditional media 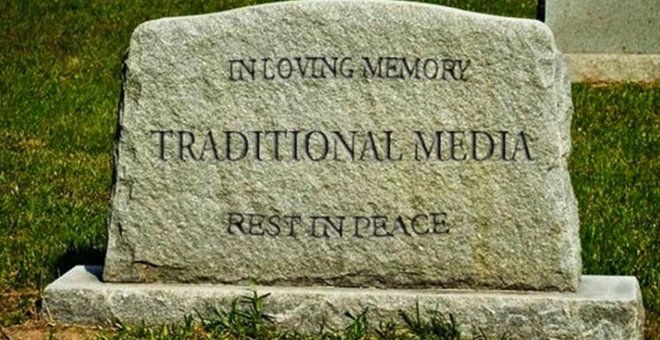 By Georgie Somerset AM - Director at Australian Broadcasting Corporation (ABC)

Like many from the country, I grew up reading my local paper, The Longreach Leader, looking for articles about topics I understood and photos of people I knew from local events, alongside ads for local businesses and community notices.

I would later work as a journalist on the South Burnett Times, developing my passion for storytelling and capturing history, while also gaining a deeper appreciation about how important a part of our communities journalists and other media staff are.

So it hit me hard recently when I heard that more than 100 rural and regional newspapers across Australia would be closing, especially when many have been reporting local news and opinions for more than a century.

The decision – made by a global corporation for profit – to summarily execute scores of much-loved newspapers, leaves Queensland with only four ‘dailies’ in print. It also comes at a time when our national broadcaster has made some tough decisions to ensure it is accessible digitally – as audiences are demanding – while supporting traditional channels and regional bureaus to share your stories.

These decisions affect people’s lives: the ability of the journalists and other staff to have fulfilling work in a regional town, to earn and to support their families; the right and desire of the members of local communities to have their stories told, their history captured and to see themselves and the places they call home in the pages of the newspapers and magazines they choose to read.

The clippings in this photo are just a couple of my scrapbooks - and yes, a front page was always celebrated, especially by the part timer! These few pages reflect issues, interest, they capture history and people.

A staggering blow to rural and regional Queensland

It isn’t overstating to say that this brutal commercial decision is yet another staggering blow to rural and regional Queensland.

Drought, flood, fire, and now COVID, have made life on the land extremely tough.

Yet with all of these significant challenges, many believe the biggest blow to our communities is the closure of our newspapers, which have been the backbone of many rural towns and regional cities for years, decades, generations, telling us what we need to know and what we want to hear – local news delivered by local people in our voice, a unique viewpoint not available anywhere else. The important role of interpreting national and international news and its potential impact for the local audience and our regions.

A key connector for the older members of our communities, who are not so computer literate and rely on the printed word to stay in touch with the world around them, especially in these socially distanced times.

These latest closures and cuts in the media come only weeks after Australia’s major magazine publisher, German company Bauer Media, announced it was laying off 70 employees and standing down almost as many, with plans to “suspend” certain magazine titles.

Australia’s magazines took a further hit when literary and cultural publications, including Australian Book Review and Overland, were “de-funded” as part of cuts to the Australia Council’s support for the arts.

Yes, there is no end in sight to the news and opinion you can find online, and most of the newspapers I’m referring to in this online piece will join them, albeit accessible only as digital paid subscriptions.

But what do you do if you can’t afford the monthly fee? Or you don’t have the digital equipment or literacy to access these publications online?

All of this couldn’t have come at a worse time. The once-strong connection city people used to have with the country has never been more in need of strengthening.

Less than a year ago, I stood at the Ekka – where the city meets the country in Queensland – to launch AgForce’s Stand With Regional Queensland campaign.

Our intent is to give regional and rural Queensland back its voice, particularly in the cities. But what if the opportunity to hear those voices continues to be lost?

One of regional Queensland newspapers that played a vital role in helping AgForce share stories from rural and regional Queensland – one family, one business, one community at a time – was Rural Weekly, who celebrated the final edition to roll off the presses at the end of June.

Do you recognise faces on these covers in the photo below? They are real people who make up our regions - people who commit their life and work to creating a better place for their family, business and the community.

Some light at the end of this bleak tunnel?

But this week I saw signs that perhaps all is not lost. That people from the country, the true backbone of our regions, are prepared to stand up and see these dark times through.

The Longreach Leader, that bastion of the central west which I grew up reading, has been serving that region of Queensland for almost 100 years, announced that the Longreach Printing Company Ltd will be expanding to produce the Rural Leader and the Highland Leader, based in Emerald, and the Callide-Dawson Leader out of Biloela. Leadership being shown by their indefatigable editor, Col Jackson.

And the bush-based publishers aren’t going to stop there with news that a new weekly newspaper, South Burnett Today, has a print launch date of 16 July under the editorship of Laura Blackmore, and that Tiffany Kirk’s Gayndah Gazette has a new subsidiary North Burnett News.

Then Graziher arrived in the mail last week – the brainchild of central Queensland’s Claire Dunne, showcasing regional brands, photographers and journalists, filled with stories of women across inland Australia, and this year adding to its library the New Zealand magazine Shepherdess.

These examples, along with word filtering through that a few other new local papers plan to be circulating rural and regional Queensland within the month demonstrate the belief that the audience is there for local stories written and produced by locals.

What can you do to help?

We need to make sure this work continues. It’s up to every individual to get on board.

Let us know if you have a community lead newspaper revival, join your community Facebook page and take part in local conversations, write to your Federal and State MPs about issues important to you, post your thoughts on their Facebook pages, and perhaps most importantly, join AgForce’s Stand With Regional Queensland campaign to make sure your voice is heard in George Street.

Even though AgForce is a member organisation based in Queensland, we welcome support from all Australian’s.

Support Queensland farmers. Stand With us in representing regional Queensland – the place they call home.