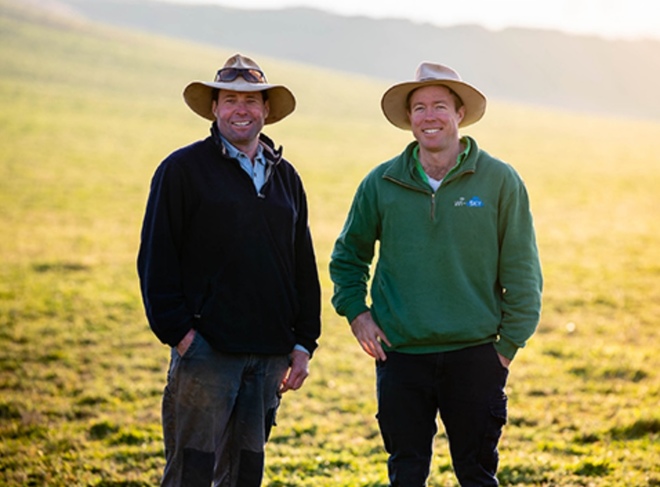 Brothers James and Jock Graham come from a traditional family farm, and embracing their entrepreneurial spirit has led to the creation of a business enterprise that spans a large scale beef, sheep and cropping operation, a major quarry and a city-grade internet service for country areas.

Run by James and Jock with their father Jim, Eulonga Pastoral Co is near Coolac, in NSW. Their farm operation includes about 1200 hectares of crop, 800 cows and 6000 sheep.

Both James, who returned to the family farm 30 years ago, and Jock, who joined him 15 years later, have been continuously expanding and diversifying the business – starting with a farm contracting business.

“We started doing contract sowing to complement our cropping program and from there it developed into Eulonga Farm Management,” James said.

“We facilitate the whole process of cropping, from sowing to harvest and everything in between.”

The next step was the establishment of Eulonga Quarries in 2007, which began as a sideline business, supplying sand and river stones to landscape gardeners, as well as sand for the Coolac Bypass.

“While it started off slowly, it’s going quite well. It now involves more staff and a lot more equipment,” James said.

Further expansion came when they bought a concrete batching plant to complement the quarry and use up some of its by-products.

The fine sand at Eulonga is also suitable for golf courses and sporting field construction.

“We rebuild a lot of golf fairways and greens which involves trucking sand to places like Sydney and Canberra," he said.

"We have three dedicated quarry trucks and we engage a host of sub-contractors as well.”

With their expansion and increasing use of technology, Jock became frustrated with the unavailability of a reliable internet service to meet their needs.

Jock has solved the problem by launching his own internet business, Wi-Sky, to service not only the family business, but also other farmers, families & towns people in country areas who are unable to access other options.

“Before Wi-Sky, satellite was the only option for us, which was too slow for Jock and he decided he was going to fix it,” James said.

While the brothers have found innovative ways to grow the family business, James said that dry weather, both in the early 2000s and in the last few years, had been their biggest challenge.

He credited improvements in equipment and livestock technology for helping to make things easier, and Rabobank for helping their business grow.

“The biggest stand-out about Rabobank is they are user friendly. Comparing Rabobank to other banks only reinforces to me how helpful, efficient and accommodating Rabobank are, we enjoy a great relationship with the office in Wagga.” James said.

“Stability is another thing that is key for us. With Rabobank, I have only had two bank managers in 30 years, the last 10 or so with Sally Bull. The continuity that this gives us is fantastic. Sally has helped us to achieve expansion and has helped us to grow our business in the direction that we are wanting to go. She is encouraging and realistic. We enjoy having Sally as our bank manager.

“The business we had five years ago is such a different business to the one we’ve got now, and it has grown with the help of our relationship with Rabobank.”

And the business looks set to keep on growing, with father-of-five James and father-of-three Jock focussed on providing a stable platform for the next generation.

“We want to keep on expanding our quarry operation and expanding our farm, to make sure we can maintain the benefits that a bit of scale brings into the future,” James said.

“I think farming is what I was destined to do. I grew up helping Dad, and it was just something I always loved.”